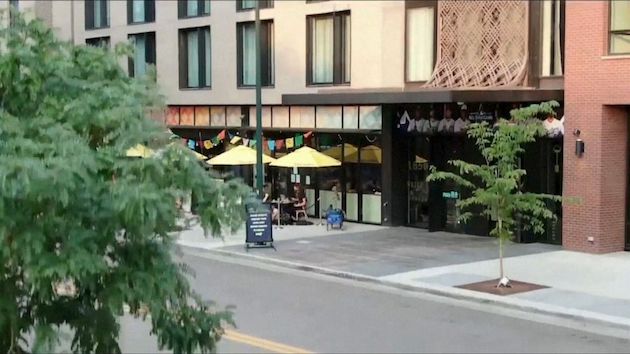 (DENVER) — A tip from a housekeeper led police to uncover a large arsenal of weapons at a hotel in downtown Denver about a block from Coors Field, where Major League Baseball’s All-Star Game is set to be played on Tuesday.

Three men and a woman were arrested and 16 long guns, body armor and hundreds of rounds of ammunition were seized from two rooms at the Maven Hotel in downtown Denver.

The discovery initially prompted police to suspect they had thwarted a possible mass shooting plot in the works. But on Sunday morning, FBI officials in Denver said a preliminary investigation has not turned up any evidence that the episode is tied to terrorism.

“We have no reason to believe this incident was connected to terrorism or a threat directed at the All-Star Game,” the FBI Denver field office said in a statement. “We are not aware of any threat to the All-Star Game events, venues, players, or the community at this time.”

The FBI said it is working closely with the Denver Police Department, the lead investigative agency of the incident, to get to the bottom of why the cache of weapons ended up at the hotel.

A preliminary assessment indicated the stash of guns appears to be connected to a possible illegal transaction involving drugs and guns, according to an internal law enforcement memo obtained by ABC News.

The four people arrested were identified by authorities as Richard Platt, 42, Gabriel Rodriguez, 48, Ricardo Rodriguez, 44, and Kanoelehua Serikawa, 43. The suspects, who are expected to appear in court on Sunday, were being held on suspicion of weapons charges and possession of a controlled substance with intent to distribute, according to Denver police.

Gabriel and Ricardo Rodriguez were being held without bond. It is unknown at this time whether the suspects have lawyers.

SWAT teams and numerous other police officers converged on the Maven Hotel around 7:30 p.m. local time on Friday after a maid at the hotel saw a rifle in one of the rooms being cleaned and reported it.

Denver police said they spent several hours Friday searching rooms on the fourth and eighth floors of the Wazee Street hotel, where the weapons and ammunition were found. Illegal drugs were also found in the rooms, police said.

“The investigation and arrests were the result of a tip from the public, serving as an excellent example of the critical role the community plays in public safety,” Denver police said in a statement, adding that the agency encourages residents and visitors “to always be aware of their surroundings and to report suspicious or illegal activity to police immediately.”

The Sage Hospitality Group, which operates the hotel, praised the police and its own staff for the quick response.

“We are incredibly proud that our team swiftly alerted the authorities in this instance,” the Sage Hospitality Group said in a statement. “We are thankful to DPD for their quick action to safely resolve this situation and will continue to work closely with them to support their investigation.”

The incident came as thousands of baseball fans poured into Denver for festivities surrounding the All-Star Game, including the annual home run derby scheduled for Monday night.