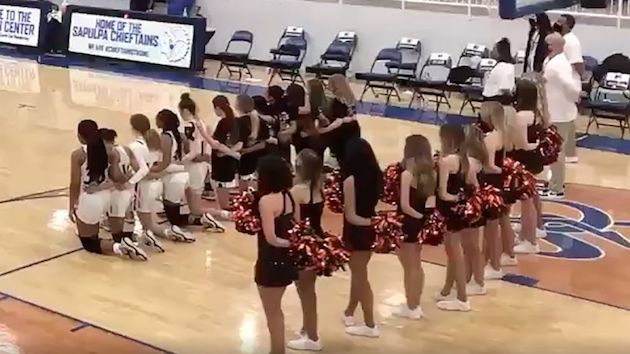 (NEW YORK) — An Oklahoma sports announcer was captured during a livestream directing racial slurs and expletives toward members of a girls’ high school basketball team who were kneeling during the national anthem.

The racist comments came shortly after Norman High basketball players knelt during the playing of the national anthem before a quarterfinal state tournament game against Midwest City at Sapulpa High School in Sapulpa, Oklahoma.

“F— them, I hope they lose,” one of the announcers can be heard saying, apparently not realizing his microphone was audible on the live broadcast. “They’re going to kneel like that? Hell no.”

“F—— n——,” the announcer later says toward the end of the anthem.

Footage capturing the remarks during the online broadcast of the game on the NFHS Network was shared on Twitter Friday morning.

The outcry — and fallout — was immediate.

“We condemn and will not tolerate the disgusting words and attitudes of these announcers,” Norman Superintendent Nick Migliorino said in a statement. “This type of hate speech has no place in our society and we are outraged that it would be directed at any human being, and particularly at our students.”

Migliorino said the school will no longer use the NFHS Network to stream the tournament.

The Oklahoma Secondary Schools Activities Association contracted the broadcast crew to announce the state tournament on the NFHS Network. The association said the crew will not be doing any games for the remainder of its championships.

“This kind of behavior will never be tolerated by anyone representing the NFHS or OSSAA,” OSSAA Executive Director David Jackson said in a statement. “State tournament playoffs are a special time for our schools, their students, and their communities, and anything that is counter-productive to education-based activities will be addressed immediately and appropriately.”

The NFHS Network, which also cut ties with the production crew, apologized for the remarks.

“The thoughts expressed in no way represent our network, and we are outraged that they found their way into the production,” the network said in a statement. “The NFHS Network firmly condemns racism, hate and discrimination. We also deeply apologize to the students, their families, and the entire community for having such ignorant and hurtful comments expressed during the broadcast.”

As news of the comments spread Friday, others in the Oklahoma community reacted. State Superintendent of Public Instruction Joy Hofmeister called them “sickening and vile,” and Norman Mayor Breea Clark said she was “livid and absolutely disgusted.”

“These young athletes were simply expressing themselves as hundreds of professional athletes around the nation have done, and no one, let alone a child, deserves to experience this kind of racist and toxic behavior,” said Clark, who announced plans to hold a town hall with the youth of Norman “so we can learn how this incident has impacted them and hear directly from our kids how we can improve our community going forward.”

The mayor called on OSSAA to end its contract with the NFHS Network.

The announcer released a statement to several local news outlets, including The Norman Transcript and The Frontier, apologizing for his racist remarks — which he blamed on being a Type 1 diabetic and “spiking” blood sugar levels.

ABC News has reached out to the announcer for comment.

Norman went on to beat Midwest City, 53-40, Thursday. During Friday’s semifinals against Tulsa Union at Sapulpa, both teams knelt, The Oklahoman reported. Norman advanced to the finals with a win Friday.