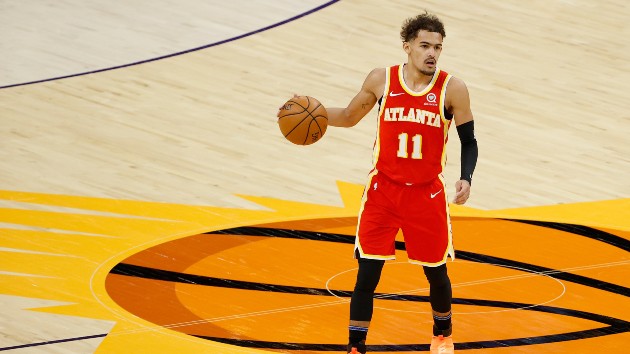 (ATLANTA) — Atlanta Hawks point guard Trae Young will be benched for the team’s next two games after injuring his ankle earlier this week.

Young, 22, had to leave Wednesday night’s game against the New York Knicks after landing wrong on his ankle following a shot in the third quarter. The Hawks went on to lose in overtime, 137-127.

On Thursday, he underwent an MRI which revealed a lateral left ankle sprain, the team announced on Twitter. The diagnosis means he will miss Friday night’s game against the Miami Heat and Sunday’s matchup against the Milwaukee Bucks.

Following an MRI today at the Emory Sports Medicine Complex, Trae Young was diagnosed with a lateral left ankle sprain. He will be listed as out for our next two games, and his status will be updated as appropriate. pic.twitter.com/LajuNj00QD

Young’s injury comes as the Hawks hope to clinch an outright spot in the NBA playoffs next month and avoid having to compete in the league’s Play-In Tournament.

Atlanta is currently the No. 5 seed in the Eastern Conference. The top six teams from each conference automatically advance to the playoffs.