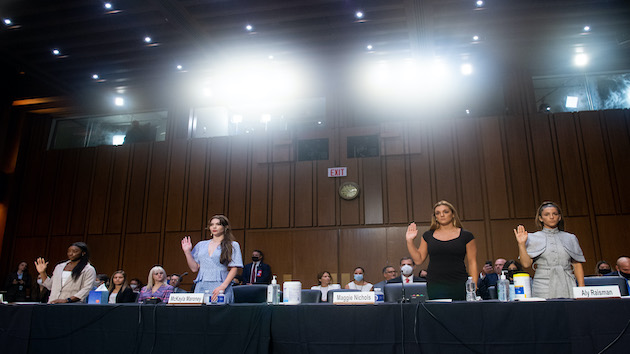 Nassar, a former doctor, was sentenced in 2018 to up to 175 years in prison for sexually assaulting hundreds of girls and women.

“We have been failed and we deserve answers,” Biles said Wednesday, fighting back tears during parts of her testimony. “Nassar is where he belongs, but those who enabled him deserve to be held accountable. If they are not, I am convinced that this will continue to happen to others across Olympic sports.”

The Senate Judiciary Committee is now investigating the FBI’s handling of the Nassar case.

A Justice Department inspector general report released this July found the FBI made “fundamental errors” in its response to allegations against Nassar, which were first brought to the agency in July 2015.

The scathing report accuses FBI field offices in Indianapolis and Los Angeles of failing to respond thoroughly to allegations against Nassar, which allowed him to continue to work with gymnasts at Michigan State University as well as a high school and a gymnastics club in Michigan.

“In reviewing the inspector general’s report, it truly feels like the FBI turned a blind eye to us and went out of its way to help protect USAG (USA Gymnastics) and USOPC (United States Olympic & Paralympic Committee),” Biles said before Congress. “A message needs to be sent. If you allow a predator to harm children, the consequences will be swift and severe. Enough is enough.”

The FBI responded to the inspector general’s report by saying the inaction by the FBI field offices “should not have happened.”

“The actions and inactions of certain FBI employees described in the Report are inexcusable and a discredit to this organization,” the agency said in a statement at the time, according to the Associated Press.

During Nassar’s trial, more than 150 people provided victim impact statements, including Raisman and Maroney. Biles first publicly said she was sexually abused by Nassar in a statement on Twitter in January 2018, writing, “I am not afraid to tell my story anymore.”

The gymnasts have also spoken out publicly about how the Nassar case impacted their mental health.

Raisman has said she has post-traumatic stress disorder from being sexually abused by Nassar. She opened up last year about the intense therapy she receives as a result, writing after one therapy session, “My body aches.”

Biles said she experienced depression as a result of the abuse by Nassar and takes anxiety medication and undergoes therapy to cope.

“I have my ups and downs,” Biles told “Good Morning America” in 2018, the same year she went public with her allegations.

Biles, a four-time Olympic gold medalist, is the only gymnast among the four who testified Wednesday who continues to compete in elite gymnastics.

She won a silver medal and a bronze medal at the 2020 Tokyo Olympics in July after dropping out of several competitions because of a mental health issue.

Biles said Wednesday she believes the Nassar scandal played a role in her mental health struggle during the Olympics, saying, I can assure you that the impacts of this man’s abuse are not ever over or forgotten.”

“The announcement in the spring of 2020 that the Tokyo Games were to be postponed for a year meant that I would be going to the gym, to training, to therapy, living daily among the reminders of this story for another 365 days,” Biles testified. “As I have stated in the past, one thing that helped me push each and every day was the goal of not allowing this crisis to be ignored.

“I worked incredibly hard to make sure that my presence could maintain a connection between the failures and the competition at Tokyo 2020,” she said. “That has proven to be an exceptionally difficult burden for me to carry, particularly when required to travel to Tokyo without the support of any of my family.”

“I am a strong individual and I will persevere but I never should have been left alone to suffer the abuse of Larry Nassar, and the only reason I did was because of the failures that lie at the heart of the abuse that you are now asked to investigate,” Biles told senators.

All eyes on Serena Williams as her final US Open begins