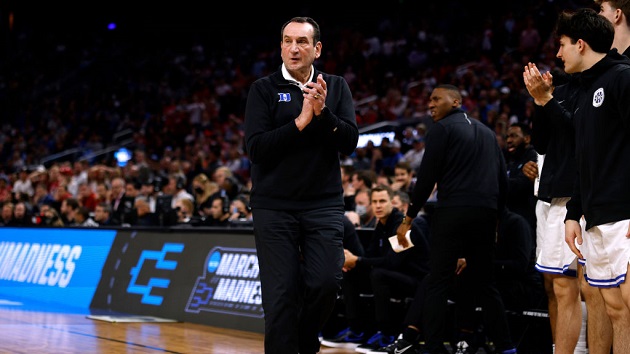 (NEW YORK) — With four perennial powerhouse teams set to play and a legendary coach prepared to end his career win or lose, this weekend’s Final Four showdowns of the NCAA men’s basketball tournament are casting March Madness on ticket prices.

The highest-priced pair of prized near-courtside ducats for the two games at the 78,000-seat Superdome in New Orleans were going for $18,510 each on Wednesday on the mobile ticket marketplace app, Gametime.

But even tickets for the highest level of the nosebleed sections are going for more than $1,000.

“We have seen just tremendous demand for this Final Four,” Adam Budelli, a spokesperson for StubHub, a ticket exchange and resale company, told ABC News. “This is currently the second-highest average ticket price we have seen for a Final Four in StubHub history.”

Budelli said the average ticket price to the Final Four on StubHub as of Wednesday afternoon was $1,050 while the lowest get-in-the-door ticket was $280 if fans are lucky enough to snag the few left. Budelli said about 3,400 seats in total were still available with the most expensive ticket on StubHub going for a little over $13,000.

The highest average ticket price for a Final Four in the company’s 22-year history remains the $1,260 college basketball fans paid in 2015 when the Duke Blue Devils beat the Wisconsin Badgers to win a fifth national title.

Duke is once again in the Final Four for the 17th time, including 13 under legendary coach Mike Krzyzewski. Affectionately known as “Coach K,” the 75-year-old winningest men’s basketball coach in NCAA Division I history announced in June that he is retiring at the end of this season.

Krzyzewski, who has been the Blue Devils’ coach since 1980, will lead his team Saturday as they take on their home state rival the University of North Carolina for the first time ever in the annual NCAA tournament. The other Final Four game on Saturday will be between Villanova and Kansas.

The winning teams will face off on Monday night for the NCAA national title.

The combination of Coach K’s last hurrah and two games involving four of the nation’s most elite teams is providing what Budelli described as a “perfect storm” to drive up ticket sales and prices.

“There’s certainly a wide variety of factors, the biggest one being you’re talking about four traditional kind of what they call ‘blue blood’ teams that have nationwide fan bases with a history of traveling and spending money, especially on their basketball programs,” Budelli said. “And then within that, you have the match-up of Duke and North Carolina, a storied rivalry. They’ve never played (each other) in March Madness, it’s Coach K’s final year and on and on you go.”

Budelli said that all four teams have such wide fan bases that StubHub’s sales data shows people across the nation are buying tickets to the Final Four. He said that while 11% of the company’s tickets so far have been purchased by people in North Carolina, 10% of purchases have been made in New York and 9% in California and New Jersey.

“All four of these teams, regardless of their alumni base,” said Budelli, “have just a wide variety of fans because of their histories in the game.”