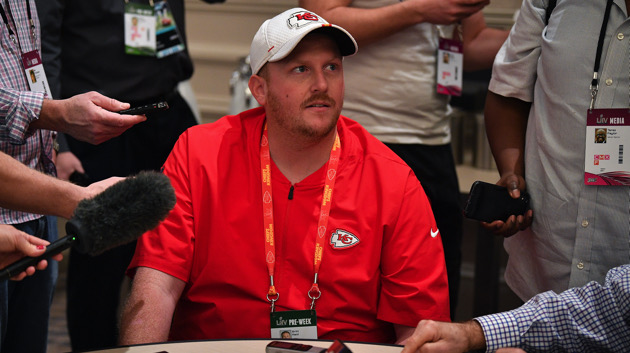 (KANSAS CITY, Mo.) — Former Kansas City Chiefs assistant coach Britt Reid was sentenced to three years in prison for a drunk driving crash that injured five people, including one child severely, according to an attorney for the victims.

Reid, 37, pleaded guilty in September to driving while intoxicated in connection with the Kansas City crash. He had faced up to four years in prison as part of a plea deal.

Reid, the son of Chiefs head coach Andy Reid, was driving his pickup truck near Arrowhead Stadium on Feb. 4, 2021, when he struck two vehicles that had stopped along the side of the highway. He had a blood alcohol content of 0.113 and was driving 84 mph in a 65 mph zone at the time of the incident, according to court documents.

Ariel Young, who was 5 years old at the time, was severely injured in the crash. She suffered “life-threatening injuries” and a “severe traumatic brain injury, a parietal fracture, brain contusions and subdural hematomas,” according to court documents.

The victims have spoken out against the plea deal and had hoped Reid would receive the maximum sentence. Prior to taking the guilty plea, Reid faced up to seven years in prison, with a trial expected to begin in September.

Ariel, now 6, attended the sentencing hearing Tuesday afternoon, entering the Kansas City courthouse with a shirt that had the words “Ariel strong” on it.

Her mother, Felicia Miller, prepared a victim’s impact statement that was read in court, detailing how the crash has impacted Ariel’s life.

“Today, Ariel drags her right foot when she walks. Next month we’re going to see a doctor about leg braces. She has terrible balance,” she wrote. “She takes longer to process information than her peers. She will have to be in special ed. She wears thick glasses that she never wore before. This is our life.”

Miller wrote that she does not accept past apologies from Reid for what happened. She wrote that Reid should never have been offered a plea deal and the victims are “offended” he asked for probation.

“Ariel’s life is forever changed because of Britt Reid. Her life will be dealing with the damage that Britt Reid did,” she wrote.

Reid addressed Ariel and her mother in court and apologized again, saying, “My family and I are in your corner,” according to Kansas City ABC affiliate KMBC.

Tom Porto, the attorney for the five victims in the crash, said in a statement that the victims are “outraged the defendant was not sentenced to the maximum sentence allowable by law.”

“No amount of prison time will ever be enough to punish the defendant for the pain and suffering he caused this family and the ongoing difficulties that Ariel will continue to endure for the rest of her life,” he continued.

In a statement provided to KMBC, Reid’s attorney, J.R. Hobbs, said his client “respects the court’s decision and appreciates the time and attention given to this matter.”

Reid “sincerely regrets and accepts responsibility for his conduct” and prays for Ariel’s “continued recovery,” the statement continued.

During a plea hearing on Sept. 12, Reid apologized for his “huge mistake.”

“I really regret what I did,” he said, according to KMBC.

At one point he turned to Ariel’s family and said, “I didn’t mean to hurt anyone that night,” KMBC reported.

When the judge asked the family if they had anything to say, KMBC reported that Miller said, “My family and I are opposed to the plea deal. I don’t think he should receive it.”

Reid was a linebackers coach for the Chiefs at the time of the crash and during the team’s Super Bowl win in February 2020. He was released by the team shortly after the incident.

In November 2021, the Chiefs and Porto announced that the team worked out a plan to help pay for Ariel’s medical care.

Reid has previously served prison time over a driving-related incident.

He pleaded guilty to simple assault and flashing a gun at another driver in a road rage incident in 2007, according to Montgomery County, Pennsylvania, court records, and served prison time. While in prison, he also pleaded guilty to a charge of driving under the influence of a controlled substance from a separate incident, according to court documents.