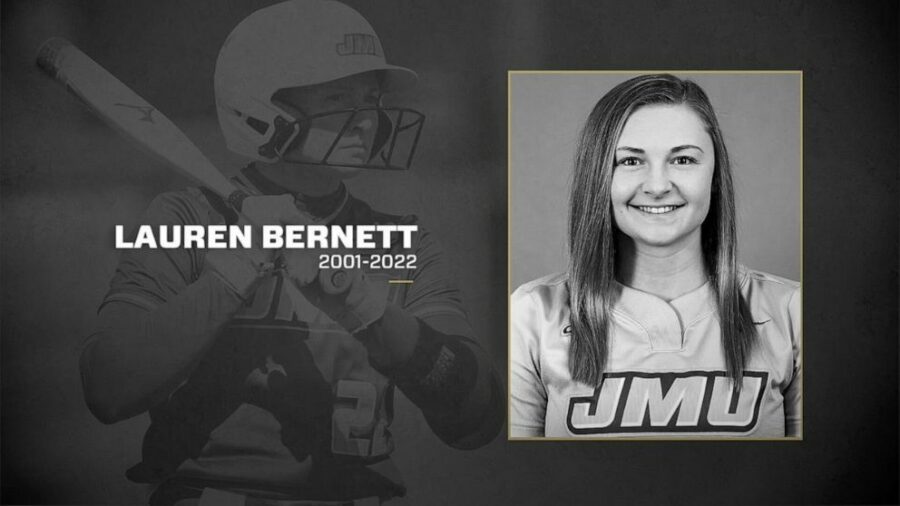 (NEW YORK) — A college softball star from James Madison University has died at the age of 20, the university announced Tuesday. Her death marks the third of a female college athlete since March.

Lauren Bernett, a sophomore biology major from McDonald, Pennsylvania, was named the Colonial Athletic Association Player of the Week on Monday, just one day before her death was announced. Last year, she helped the school reach the Women’s College World Series.

Authorities said Wednesday they are classifying the death of Bernett as an “apparent suicide.”

In a statement, Rockingham County Sheriff Bryan Hutcheson said his department is still conducting its investigation and is awaiting a report from the Office of the Chief Medical Examiner of Virginia.

On March 2, Stanford University in Stanford, California, announced the death of 22-year-old Katie Meyer, the goalkeeper and captain of the women’s soccer team.

Her parents later shared that Meyer’s death was a suicide, telling NBC’s “Today” show they had “no red flags” about their daughter’s mental health. The Meyers acknowledged the pressure of college sports, however.

“There’s so much pressure I think on athletes, right, especially at that high level balancing academics and a high competitive environment,” Gina Meyer said on the program. “And there is anxiety and there is stress to be perfect, to be the best, to be number one.”

Earlier this month, Sarah Shulze, a cross-country athlete at the University of Wisconsin-Madison, died by suicide, according to a statement from her parents and sisters.

“Sarah took her own life. Balancing athletics, academics and the demands of every day life overwhelmed her in a single, desperate moment,” the family wrote on Shulze’s website. “Like you, we are shocked and grief stricken while holding on tightly to all that Sarah was.”

The family described Shulze as a “power for good in the world” who advocated for social causes and women’s rights and was a member of the Student Athlete Council at University of Wisconsin-Madison.

On college campuses in the United States, around 30% of women and 25% of men who are student-athletes report having anxiety, according to data shared by the American College of Sports Medicine (ACSM).

The NCAA found that during the COVID-19 pandemic, student-athletes continued to experience “heightened” mental health concerns with students reporting stress due to academic concerns, lack of access to their sport, financial worries and COVID-19 health concerns.

Professional athletes like Michael Phelps, Simone Biles and Naomi Osaka have been public in recent years about the pressure, stress and burnout they’ve faced at the top of their sports, and those are struggles college athletes may feel too.

According to the ACSM, student-athletes face pressures from academics and competing, as well as other stressors like being away home home, traveling for games, feeling isolated from campus and other students due to their focus on sports and adapting to being in the public spotlight.

Cailin Bracken, a lacrosse player at Vanderbilt University, gained national attention this month after writing an essay urging coaches, schools, parents and fellow players to pay attention to the mental health of student-athletes.

“Playing a sport in college, honestly, feels like playing fruit ninja with a butter knife,” Bracken wrote in an essay titled, “A Letter to College Sports.” “There are watermelons and cantaloupes being flung at you from all different directions, while you’re trying to defend yourself using one of those flimsy cafeteria knives that can’t even seem to spread room-temperature butter.”

“And beyond the chaos and overwhelm of it all, you’ve got coaches and parents and trainers and professors who expect you to come away from the experience unscathed, fruit salad in hand,” she added.