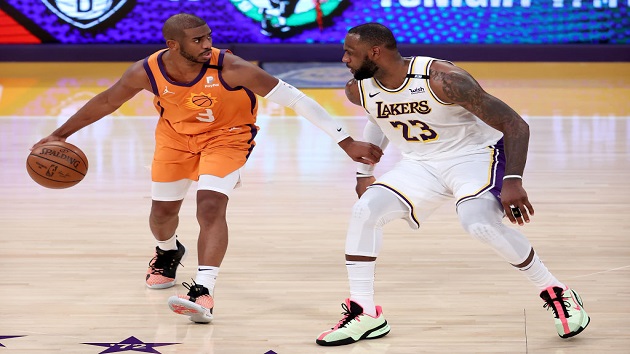 (LOS ANGELES) — Phoenix Suns guard Chris Paul has been plagued by injuries during playoff runs before in his career. The veteran out of Winston-Salem, North Carolina suffered a hamstring injury in the 2018 Western Conference Finals while as a member of the Houston Rockets and his team up 3-2 against the Golden State Warriors. Paul would miss games six and seven and the Warriors would go on to win the series.

During his stint with the Los Angeles Clippers, Paul would suffer a hamstring injury in 2015 in their Game 7 111-109 win over the San Antonio Spurs in the first round, but would sideline him for a portion of the semi-finals against the Rockets. A hand fracture in the Clippers 2016 first round series against the Portland Trail Blazers would also keep Paul off the court.

However, Paul would not be denied the opportunity to help the Suns get back in their first-round series against the Los Angeles Lakers. According to ESPN, Paul convinced head coach Monty Williams, who coached him in New Orleans for one season, to play him in Game 4 with the team trailing 2-1 in the series.

“He said, ‘Coach, let me start, and if you don’t think I’m looking like I normally do, then take me out and we’ll have to go in a different direction,"” Williams said. “This is one of those situations that I had to trust the player.”

Paul finished the game with 18 points and nine assists, while teammates Devin Booker and Jae Crowder both added 17 points in their 100-92 win over the Lakers to knot the series up at 2-2 on Saturday evening.

ESPN reports he made it clear to his teammates that if they felt he was a liability at any point, they should tell him, “I told them, ‘I don’t know how long it’s going to be, but if you all feel like I’m out here looking like some trash, just tell me and I’ll get out."”