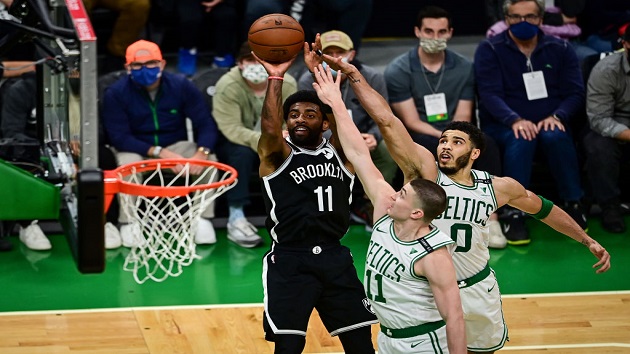 (NEW YORK) — There have been a string of incidents involving fans and NBA players during the playoffs since capacity restrictions were relaxed in arenas. In Boston on Sunday night, a Celtics fan allegedly threw a water bottle at Brooklyn Nets guard Kyrie Irving as he walked towards the tunnel following his team’s 141-126 win over Boston in Game 4.

The fan who has been identified as 21-year old Cole Buckley from Braintree, Massachusetts according to the Boston Police Department, was arrested and escorted out of TD Garden. ESPN reports Buckley has been charged with assault and battery by means of a dangerous weapon. He will be arraigned on Tuesday in Boston Municipal Court.

Irving responded to the incident, “You’re seeing a lot of old ways coming up… it’s been that way in history in terms of entertainers, performers and sports for a long period of time… just underlying racism and treating people like they’re in a human zoo.”

“You’re seeing a lot of old ways come up … just underlying racism and treating people like they’re in a human zoo.”

In Philadelphia, Washington Wizards guard Russell Westbrook had popcorn poured on him while walking through the tunnel in Wells Fargo Center after suffering an apparent injury last week. The father of Memphis Grizzlies guard Ja Morant said Utah Jazz fans at Vivint Arena hurled racists and vulgar remarks at him and his wife. And in New York at Madison Square Garden, a Knicks fan spit on Atlanta Hawks guard Trae Young and has been banned indefinitely.

—KD after a fan in Boston threw a water bottle at Kyrie pic.twitter.com/AY4RJL3viY

According to ESPN, Irving played with the Celtics for two seasons before joining the Brooklyn Nets as a free agent in 2019. This weekend of games between the teams marked Irving’s first return to TD garden with fans due to the COVID-19 pandemic.