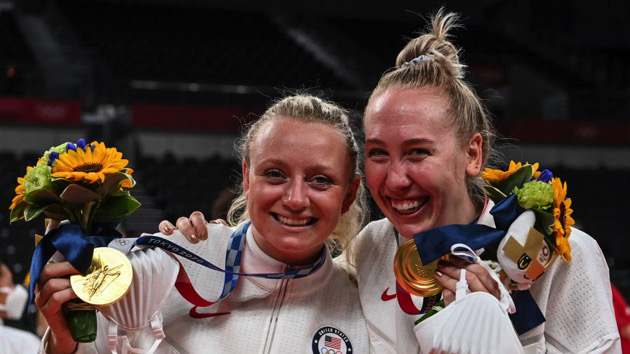 (ANAHEIM, Calif.) — A California man has been arrested for the theft of an Olympic volleyball champion’s gold medal last month.

The medal, awarded to U.S. women’s volleyball starting setter Jordyn Poulter during the 2020 Tokyo Games, still has not been found, the Anaheim Police Department said in a statement.

Fernandez was arrested Friday and arraigned Tuesday, where he pleaded not guilty. Court records show that he was being held in custody.

Poulter is offering a $1,000 reward for the medal’s return with “no questions asked,” Anaheim police said.

According to police, the medal was stolen from Poulter’s car while it was parked in a garage.

The medal, awarded to Poulter as part of the the U.S. women’s volleyball team’s historic first Olympic win, was given after the Americans defeated Brazil in the delayed 2020 Tokyo Games in 2021.

Poulter did not immediately respond to a request for comment from ABC News.

Poulter, 24, was training in California and had been living in Anaheim when the theft occurred. She had left the medal in a bag inside her unlocked car before leaving it in a two-door garage with the door open, police said.

“I really unintentionally forgot to take it out,” Poulter told NBC on Tuesday.

After going inside for a quick Zoom call, Poulter returned to see the car’s center console open and found her bag missing, according to police. The medal, along with several other items, had been taken.

The medal was awarded to Poulter after her first and only Olympic performance so far.

Poulter told the Los Angeles Times she cares more about the emotional value of getting her medal back versus the lost monetary value, citing the medal as being worth less than one might assume.

According to the International Olympic Committee, there are around six grams of gold plating on the 2020 Tokyo gold medals, and the rest is pure silver. The average 2020 gold medal weighs about 556 grams total.

The Anaheim Police Department asks anyone with information on the medal’s whereabouts to contact the department at 714-765-1900 or the Orange County Crime Stoppers at 855-TIP-OCCS.