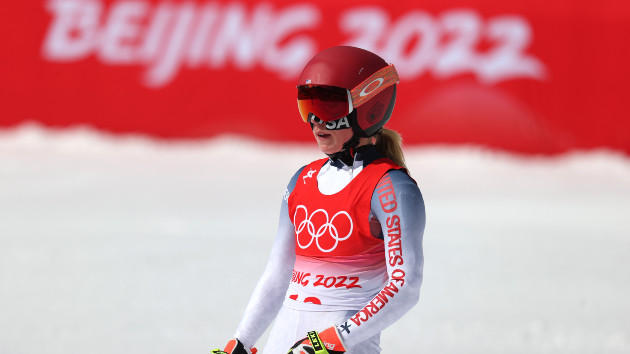 (BEIJING) — U.S. skier Mikaela Shiffrin on Tuesday came up empty handed in her fourth competition, placing 18th in the downhill skiing event, after wiping out in her first two races and finishing ninth in the super-G event.

Shiffrin was expected to be a downhill contender, although the event wasn’t her strongest. Her time of 1:34.36 placed her 2:49 behind Corinne Suter of Switzerland, who took gold with a time of 1:31.87. Italy brought home both the silver and bronze medals, with Sofia Goggia finishing in 1:32.03 and Nadia Delago finishing in 1:32.44.

“Racing DH tomorrow!” Shiffrin said on Twitter on Monday. “The track is spectacular and I have ‘overthought’ the crap out of it over the last couple days so it’s prob time to just point ‘em straight and get low.”

She is expected to compete in the combined on Feb. 17. She also said on Thursday she may compete in the team event, which she had not planned to enter coming into the Games.

Shiffrin last week finished ninth in the super-G, with Switzerland’s Lara Gut-Behrami winning gold, her second medal of the Games.

Two days earlier, Shiffrin had shockingly busted out of the competition just seconds into the first run of the slalom. Shiffrin missed the fourth gate in her run, the event where she won her first Olympic gold in 2014.

The skier, who was expected to challenge for several medals in Beijing, sat on the side of the hill, with her head in her hands, for 20 minutes after the stunning accident.

The 26-year-old also fell during her first run in the giant slalom last Monday, disqualifying her from the event.

“Could blame it on a lot of things…and we’ll analyze it till the cows come home, but not today,” Shiffrin said on Instagram following that crash. “Today I chalk it up to really awful timing of a really frustrating mistake. Moving focus to slalom now, AND cheering for my teammates in the second run of the GS and the DH!”

Shiffrin, a Colorado native, has been competing since she was 16 and quickly became one of the sport’s all-time greatest skiers with her record-setting performances. She is the most decorated Alpine skier in the world circuit having won 11 World Championship medals, six of them gold.