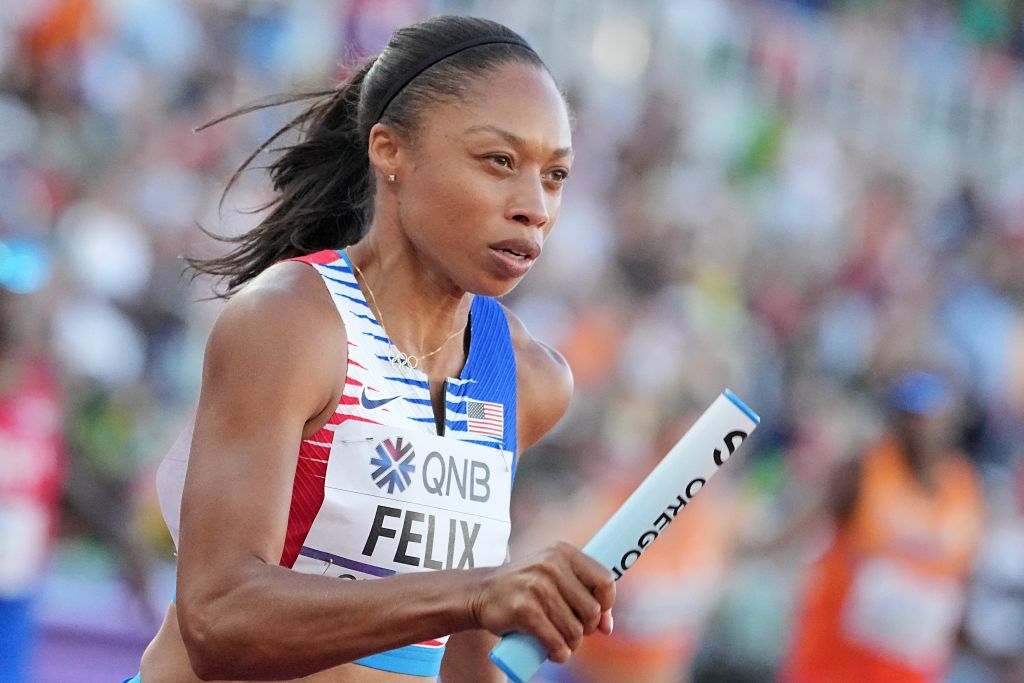 (EUGENE, Ore.) — The celebrated runner, who is the most decorated track star with 11 Olympic medals and 19 world championship medals, ran her last championship race ever on Friday, the first day of the 2022 World Athletics Championships in Eugene, Oregon.

Felix ran the second leg of the mixed 4x400m relay final, securing a bronze medal for herself and fellow teammates Elija Godwin, Vernon Norwood and Kennedy Simon. Their final time clocked in at 3:10.16, not quite fast enough to keep the lead.

The Dominican Republic and the Netherlands teams overtook the Americans to place first and second respectively.

Felix’s family members, including parents Paul and Marlean Felix, husband Kenneth Ferguson and their 3-year-old daughter Camryn, were in the stands cheering her on at Friday’s championships.

Although this chapter of her life is ending, Felix said she plans on telling her daughter all about her two-decade adventure in running, to inspire her to go after her own goals.

“When she’s old enough to understand, I’m definitely going to be telling her about the journey that I’ve been on and really just how to overcome adversity and how to stand up for what you believe in and not to let anyone put limits on you, and I want her to go after everything she wants to do,” Felix told “GMA3: What You Need to Know” last week, ahead of the championships. “I want her to experience true equality and just to know that sometimes, you’ve got to be a fighter and just never to give up.”

After the race, Felix also took some time to reflect on social media. “It’s been such a joy,” she tweeted.

“What I’ve learned is that you have to keep going. Just don’t quit,” she wrote in the caption of a separate Instagram post. “When you get knocked down, get back up. Ask for help because you’ll never do it alone. Take small steps toward your passion and you’ll end up in your purpose. Be brave with your life because you’ll have an impact on people that you never thought was possible.”

“Don’t be sad it’s over, be happy it happened,” she continued in a follow-up post.

The 36-year-old first began competing in track and field while she was a student at Los Angeles Baptist High School, now the south campus of Heritage Christian School in North Hills, California. She was named High School Athlete of the Year by “Track and Field News” in 2003, the same year she turned pro.

Two years later, in 2005, she became the youngest athlete ever to win a world championship in the 200 meters.

Since that time, she has amassed a pile of wins at the international level, including nearly a dozen Olympic medals, as well as a number of U.S. national titles.

In April, the powerhouse athlete announced the 2022 season would be her last.

Felix also told “GMA3” that for her next chapter, she plans to shift her focus to her lifestyle brand, Saysh.

“I started a company for women after some of the adversity that I went through not being fully supported through my pregnancy,” Felix said. “It’s built completely for women. We make lifestyle sneakers and so I’m excited for more women to check it out … [I’m] really trying to do something different there.”

Felix will compete in one more final race, presented by her sponsor Athleta, in her hometown of Los Angeles in August before officially retiring.

All eyes on Serena Williams as her final US Open begins