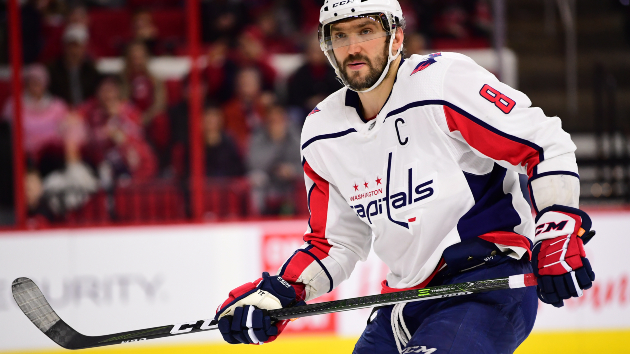 (WASHINGTON) — One of the NHL’s biggest stars is confident he’ll work out a new contract with his longtime team soon.

Washington Capitals captain Alex Ovechkin said Tuesday that he believes he’ll remain with the only team he’s ever played for. The 35-year-old just finished the last season of a 13-year, $124 million deal.

Ovechkin, who is negotiating a new contract without an agent, said he has been speaking with Capitals owner Ted Leonsis and general manager Brian MacLellan recently.

“I’m confident, we still have time,” he told reporters in a year-end media availability. “Obviously, I want to finish my career here. I’m pretty sure we will do something soon.”

He called 2020-21 a “hard year,” reflecting on being forced to sit out four games after he and several teammates were found to have violated COVID-19 protocols, as well as “lots of mini-injuries and obviously a big injury before the playoffs.”

The team was also eliminated in the first-round of the postseason, the third straight year the Capitals have lost their opening series. The team hasn’t advanced since their 2018 Stanley Cup win.

Sources told ESPN that the Capitals are considering different options for Ovechkin’s new contract, including either a one-year, or four-year deal. Prior to the pandemic, Ovechkin was asking for $12.5 million per year, a source says. It’s unclear if that number will change because of the league’s salary cap remaining flat.

A key figure in the D.C. community, Ovechkin and his wife Nastya recently became investors in the NWSL’s Washington Spirit.

Last month, Leonsis told The Athletic that it was important to keep Ovechkin with the team, saying that whether the capain “plays five more years, 10 more years, whatever it is, we’ve got his back.”

“Our commitment to him is to continue to have great teams,” Leonsis said. “We’ll spend to the cap; we’ll try to win championships.”

Ovechkin has scored 730 goals in his career, 164 shy of Wayne Gretzky’s all-time record. And on Tuesday Ovechkin says he still hopes to break that mark, saying “you just have to go out there and do your thing. Maybe it happens, maybe not. One step at a time.”