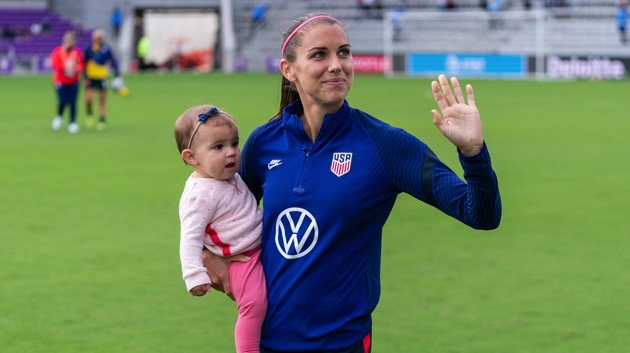 (NEW YORK) — Soccer star Alex Morgan has scored more than 100 goals in her soccer career, but the one she scored Wednesday may be the sweetest so far.

Morgan, 31, scored her first goal for the U.S. Women’s National Team (USWNT) since giving birth to her daughter, Charlie, last May.

Morgan’s goal, her 108th in her career, helped propel the USWNT to a 6-0 victory against Argentina, which earned the team its second consecutive She Believes Cup title.

“First USWNT goal as a momma,” Morgan captioned a photo of her goal in an Instagram story.

Morgan told Good Morning America last year that “taking a step back from soccer” while pregnant was “a little different” for her, but added that she was “enjoying it.”

“I hope that she’s born into a world that she can accomplish much bigger and better things that I’m ever capable of,” Morgan told GMA at the time.

Morgan, who is married to soccer player Servando Carrasco, was back in action with the USWNT after taking time off earlier this year to recover from COVID-19, which she said she contracted while in California over the holidays.

Last year, Morgan relocated to England, where she played several games with Tottenham Hotspur Women. It was confirmed in December that she would be returning to the U.S., where she is a member of the Orlando Pride.

Morgan scored her goal Wednesday in Orlando, in front of her hometown fans.

Loved getting my first US goal at home in Orlando. Thanks for all the love this tournament. Back to work with @ORLPride now! https://t.co/975cdq2XFV

She is not the only Pride player to now be playing as a mother.

The couple, who wed in 2019, shared the news on social media that their daughter, Sloane Phillips, was born on Feb. 12, weighing 6 pounds, 11 ounces.

USWNT star Megan Rapinoe gave Sloane a shout-out when Rapinoe scored a goal earlier in the She Believes Cup. After her goal, Rapinoe ran to the cameras and held her arms like she was cradling a baby.