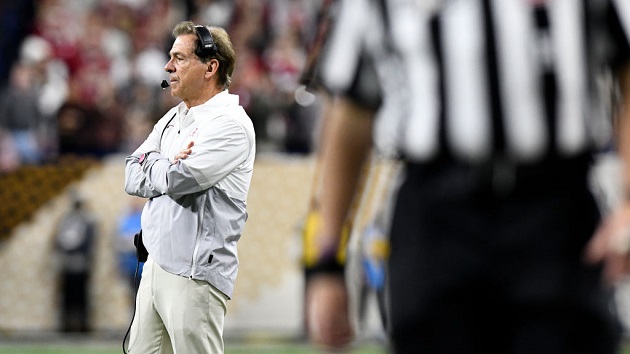 (TUSCALOOSA, Ala.) — University of Alabama head football coach Nick Saban and NBA icon Jerry West joined three fellow sports personalities native to West Virginia to pen a letter to Sen. Joe Manchin, D-W.Va., urging him to help push voting rights legislation in the Senate without asking him to allow a rule change that would be necessary to ensure the bill’s passage.

On Tuesday evening, Manchin pointed out on C-SPAN that the version of the letter made public this week was missing a key footnote in which Saban indicates his objection to eliminating the filibuster while the other signatories take no position on it.

“Coach Saban is not in favor of getting rid of the filibuster in the Senate. He believes this will destroy the checks and balances we must have in our Democracy. The others signing this letter take no position on this aspect of Senate policies,” the version shared by Manchin reads.

Manchin, like Saban, has also said he supports Democrats’ voting rights legislation but has long stated his opposition to changing the Senate filibuster rule.

Saban, one of the best-known coaches in American sports, originally hails from West Virginia and maintains a friendship with the West Virginia senator dating back to the 1950s. West, former NFL players Oliver Luck and Darryl Talley, and former NFL Commissioner Paul Tagliabue also signed the letter.

Their letter focuses on equal election access for all Americans and the importance of transparency and impartiality in elections administration. A House-passed voting rights bill that combines both the Freedom to Vote Act and John Lewis Voting Rights Advancement Act addresses these issues with provisions that boost vote by mail and aim to prevent new laws restricting voting rights from being enacted in the future.

“We strongly support urgently needed legislation that will protect both the rights of voters and the integrity of outcomes in all Federal elections,” the letter, dated Jan. 13, reads.

The letter comes amid an ongoing, high-stakes voting rights battle in the Senate, with the measure looking destined to be blocked by a Republican filibuster since Democrats do not have the support of their entire slim majority to pass a rules change. With Manchin and fellow Democrat Kyrsten Sinema, D-Ariz., reaffirming their opposition to altering the filibuster rule, Senate Majority Leader Chuck Schumer’s attempt to create a carveout for voting rights is poised to fail when it is voted on Wednesday evening.

Manchin told reporters Wednesday morning he would be speaking on the Senate floor later in the day to outline where he stands. But he has been adamant in his resistance even calls to get rid of the filibuster to protect voting rights have grown louder.

The latest push for federal voting rights legislation comes after 19 states passed laws restricting voting rights in 2021 following the 2020 election, according to the nonpartisan Brennan Center for Justice.