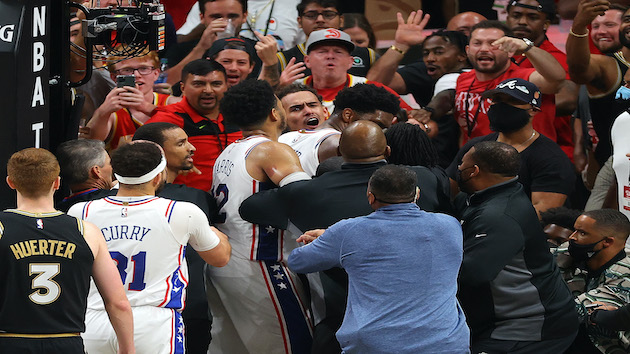 (ATLANTA) — Philadelphia center Joel Embiid was fined $35,000 for his actions during Friday’s playoff game against Atlanta, the NBA announced on Sunday.

With 4:02 left in the fourth quarter, Embiid was called for an offensive foul while attempting a layup and fell on Hawks forward John Collins. Collins shoved Embiid when they were both on the ground. When the two players stood up, Embiid started walking towards Collins with his arms stretched out wide, pushing him back towards the base of the hoop. Players from both teams broke up the altercation.

Both players were given technical fouls.

“I got a tech for it, and I didn’t think it was an offensive foul,” Embiid said after game. “I was just trying to stay calm and have my hands up. And someone was pushing me from the back, and I don’t understand why I got a tech, but I guess it is what it is.”

The NBA says Embiid was fined for ‘escalating the on-court altercation and ‘failing to comply with an NBA Security interview following an on-court incident.’

The following has been released by the NBA. pic.twitter.com/2yzmuxP3AJ

Atlanta forward Bruno Fernando was suspended one game for coming off the bench during the incident. He will serve the suspension during game seven tonight in Philadelphia.

Philadelphia and Atlanta are tied at three games in their Eastern Conference semi-final series.