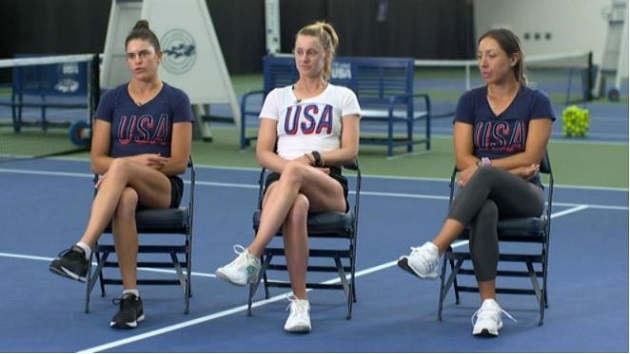 (TOKYO) — U.S. tennis star Cori “Coco” Gauff has been sidelined from the Tokyo Olympics after testing positive for COVID-19, leaving the women’s singles squad to just three first-time Olympians for the red, white and blue.

Alison Riske, Jen Brady and Jessica Pegula spoke with “Good Morning America” moments after learning they would represent Team USA without Gauff before heading to the Summer games.

“Obviously she’s going to be disappointed. She’ll be sad. But, you know, she has so much potential to do great things in this sport. And I know she will,” Brady said. “Hopefully she recovers well and we’ll see her back out on the court soon. Back here in the States.”

Just days ahead of opening ceremonies and before traveling to Japan, the 17-year-old phenom who was meant to lead a 12-member squad tweeted, “It has always been a dream of mine to represent the USA at the Olympics, and I hope there will be many more chances for me to make this come true in the future.”

Riske, 31, added to her teammate’s sentiment saying she wants Guaff to know “she’ll be missed” and to “keep her head up. Focus on your health and make sure you’re feeling OK — We’ll see you on the court soon.”

The United States Tennis Association tweeted a statement in response to her announcement.

“We were saddened to learn that Coco Gauff has tested positive for COVID-19 and will therefore be unable to participate in the Tokyo 2020 Olympic Games,” USTA’s statement read. “The entire USA Tennis Olympic contingent is heartbroken for Coco. We wish her the best as she deals with this unfortunate situation and hope to see her back on the courts very soon.”

It is unclear if Gauff was fully vaccinated before testing positive for COVID.

All three Tokyo-bound singles competitors expect “nothing but good vibes,” Brady said. And Riske said she is “most excited about Opening Ceremonies.”

“We all earned our way onto the team. We all deserve to be here in the end. We’re just going to embrace I think,” Pegula said.

Brady added: “It’s going to be something that I’m going to remember the rest of my life. Proud of each and every one of us … let’s go represent the U.S.”

For the first time in 25 years, the tennis roster for the U.S. will be missing another set of marquee names with both Serena and Venus Williams sitting out.

While Americans have racked up 24 Olympic medals in tennis since 1988, Riske said “just to bring medals back would be amazing.”

While Guaff is the highest-profile athlete to test positive from Team USA, others from around the world including two South African soccer players, as well as a rugby coach have also come into contact with COVID-19. A group of eight British gymnasts are isolating after a case was detected on their flight.

The threat of coming into contact with or testing positive for the virus has loomed large over the Olympic athletes.

If a test is confirmed, the athlete faces immediate quarantine for up to 14 days and forfeit any chance of competing in the games.

To ensure Team USA gymnastics has enough replacements, the athletes have all been separated for safety reasons.