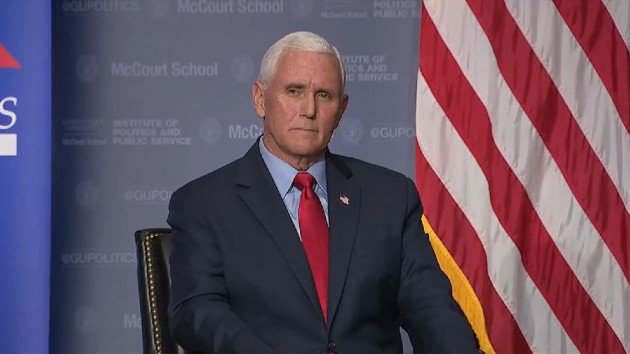 (WASHINGTON) — Former Vice President Mike Pence had this to say on Wednesday night when asked if he would vote for Donald Trump in 2024, if his former boss were the Republican presidential nominee: “There might be somebody else I’d prefer more.”

Speaking at Georgetown University about the future of conservatism, where he also took questions from students, Pence declined to rule out a bid of his own for the White House but said there were other priorities before him.

“When I tell you as I have every confidence that the Republican Party is going to sort out leadership, all my focus has been on the midterm elections and it’ll stay that way for the next 20 days,” he said. “But after that, we’ll be thinking about the future — ours and the nation’s — and I’ll keep you posted.”

His comments came in conversation with Mo Elleithee, a Democratic National Committee official, executive director of Georgetown’s Institute of Politics and Public Service and a larger part of the Young America’s Foundation’s college tour by the former vice president, who became estranged from Trump in the wake of the Jan. 6 insurrection — when pro-Trump supporters stormed the Capitol and briefly sent Pence and gathered lawmakers into hiding.

Since then, Pence has continued to speak publicly about his own vision for the GOP.

In prepared remarks on Wednesday, he only mentioned the midterm elections once, predicting GOP flips across Congress and beyond.

“Frankly, I’m very optimistic that in 20 days, we’ll soon have new majorities in the House and Senate and in statehouses around America that will stand for freedom without a problem,” he said.

But, asked by a student how being Trump’s vice president had affected his own future in the Republican Party, he joked, saying he’s not particularly a long-term planner.

“I can tell you whatever the future holds for me and for [my wife] Karen Pence, it’ll be our heart’s desire just to reflect at the right time, maybe in the months ahead, determine what our calling is and [we] will follow that calling come what may,” he said.

When asked by another student to highlight something he liked in both President Joe Biden and Vice President Kamala Harris, Pence quipped, “Look at the time.”

Later, he added that he and Biden had a strong working relationship while both served in Congress and that he called Harris after she was tapped to be Biden’s running mate — the first Black woman and first person of Asian descent on a major party ticket — to extend prayers to her and her family.

“I can’t identify a policy that I agree with in the Biden administration. But again, you know, I think I think you could say that some of these ideas are bad without saying they’re a bad person,” he said.

During a brief question-and-answer session, Elleithee asked Pence how society could move past a culture of intense partisanship.

He pointed to friendships with Democrats in Congress, including the late Georgia Rep. John Lewis, an icon of the civil rights movement, as proof of occasional common cause across the aisle.

“There’s a wide range of issues that we can agree on, issues that we can find practical solutions for the American people on, that I think all begins with treating others the way we want to be treated,” he said. “And I really do believe that there’s a hunger in this country today for getting back to the way Americans deal with one another.”

Pence’s 30-minute speech at Georgetown focused on his background, how he evolved politically and religiously and the effect former President Ronald Reagan had on that transformation. As he repeatedly says, he’s a “Christian, a conservative and a Republican — in that order.”

But he noted something specific about his style, as he saw it.

“I like to say, ‘I’m a conservative, but I’m not in a bad mood about it,"” he said, also referring to himself as “Rush Limbaugh on decaf” when he hosted his radio show in Indiana before he won his bid for Congress.

Elsewhere, though, he spoke more gravely of the dangers posed to the country by Democratic opponents and a “woke agenda” — a warning far apart from some of his other comments about Democrats on Wednesday night.

“In one short year and a half, the Biden-Harris administration has unleashed a tidal wave of left-wing policies that have in many ways wiped out the progress that we’ve made to the detriment of the American people,” he argued. “Frankly, sometimes I think Democrats have moved so fast that the left hand doesn’t know what the far-left hand is doing.”

About 25 minutes into his speech, a group of students stood up and walked out of the venue. He referenced them in a seemingly ad-libbed addition.

He also continued to criticize the Biden White House over gas prices, presumed threats to freedom of expression and more.d

He praised the younger generation as one capable of great change and the “last line of defense on the Constitution of the United States.”

“As you study the American founding and understand what’s made this country exceptional and unique, grow in your own heart and mind,” he told attendees, including students.

He also spoke earlier Wednesday at the Heritage Foundation, the conservative group, where he cautioned against “unprincipled populism” overtaking his party. He said the GOP must continue to embrace smaller government, strong national defense and “traditional moral values.”