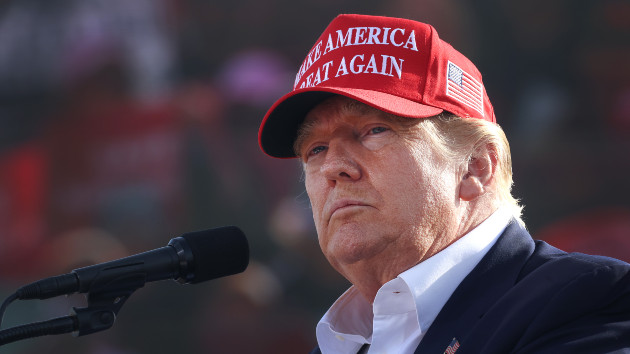 (NEW YORK) — Six in 10 Republicans back former President Donald Trump as their party’s leader, slightly more than the share of Democrats who line up behind President Joe Biden’s leadership of their party — a sign of Trump’s lasting strength in his party as the midterm primary season revs up.

Nearly a year and a half after he left the presidency, Trump’s influence is extensive, albeit not monolithic: 60% of Republicans and Republican-leaning independents say the GOP should follow his leadership, while 34% prefer a new direction.

Notably, that slightly exceeds backing for Biden’s leadership within his party, 53-38% in this ABC News/Washington Post poll.

Support for Trump within the GOP, moreover, has held up since he left office: The 60% who favor his leadership now is essentially the same as it was in an ABC/Post poll in mid-January 2021, 57%, shortly after Jan. 6 riot at the U.S. Capitol. That said, it’s down from 76% in a similar question in February 2018.

Indiana and Ohio go to the polls Tuesday and the spring/summer midterm primary season accelerates from here, with a dozen primaries and a runoff this month. Tuesday’s most-watched race pits Trump-endorsed candidate J.D. Vance in the Ohio Republican primary for U.S. Senate against several other front-runners who likewise have sought to embrace Trumpism.

Trump holds intra-party support even as a slim majority overall continues to favor charging him with a crime related to the Capitol riot. At the same time, the public divides evenly on the work of the House committee investigating the incident.

Americans split 40-40% on whether the committee is or is not conducting a fair and impartial investigation of the riot; a substantial 20% have no opinion in this poll, produced for ABC by Langer Research Associates. Partisan divisions on the question are sharp.

Evaluations of the House committee’s investigation of the riot divide along party lines. Sixty-eight percent of Democrats think the committee is conducting a fair and impartial investigation; a similar seven in 10 Republicans say it’s not doing so. Independents are split, 39-38%.

Trump-aligned Republicans and Republican leaners — those who say the party should follow his leadership — are among the least apt to see the committee as fair and impartial, with just 10% saying so. That rises to 27% of those who’d prefer GOP leaders go another way.

On the Democrats’ side, those less wed to Biden’s leadership are far less apt to see a fair and impartial investigation, 48% vs. 78% among those backing his direction.

Beyond the riot, opinions on the standard-bearers split each party along demographic and attitudinal lines.

Most in both groups disapprove of Biden’s performance in office, but strong disapproval is significantly more intense among Trump Republicans, 93%, vs. 63% among other Republicans and GOP leaners, one in five of whom in fact approves of Biden’s work.

Age gaps on the Democratic side are more dramatic: Just 20% of Biden-aligned Democrats are younger than 35, compared with 52% of those who’d like to see the party move away from the president. In addition to being older, Biden Democrats are more likely to be moderates, have higher incomes and be more educated than other Democrats and Democratic-leaning independents.

Those demographic differences align with a major rift on economic issues between the two. Just 46% of those who want to see the party move in a different direction approve of Biden’s handling of the economy, compared with 81% of Biden Democrats. Biden Democrats also are more apt to say good jobs are available in their community, and are far less apt to express upset about inflation.

Ultimately, Trump Republicans and Biden Democrats share a characteristic that suggests they’ll continue to hold sway: They’re both more likely than others to be registered to vote and to say they’re certain to vote in November.

This ABC News/Washington Post poll was conducted by landline and cellular telephone April 24-28, 2022, in English and Spanish, among a random national sample of 1,004 adults. Results have a margin of sampling error of 3.5 percentage points, including the design effect. Partisan divisions are 29-25-40%, Democrats-Republicans-independents.

The survey was produced for ABC News by Langer Research Associates with sampling and data collection by Abt Associates. See details on the survey’s methodology here.