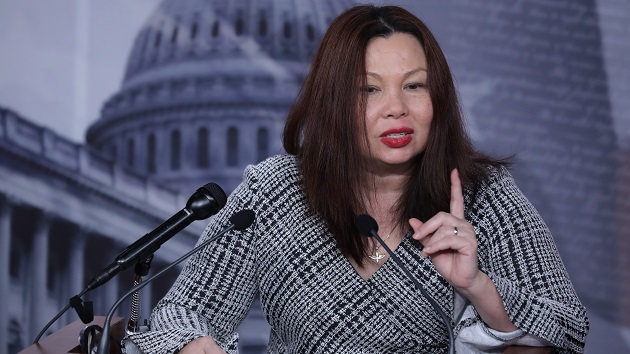 (WASHINGTON) — After reaching a “trigger point” with the White House over Asian American and Pacific Islander representation in the Cabinet, Illinois Democratic Senator Tammy Duckworth is “very pleased” with the response to her concerns, she said on ABC News’ “Powerhouse Politics” podcast Wednesday.

She told ABC News Chief Washington Correspondent Jonathan Karl and Political Director Rick Klein that the “trigger point” that caused her to threaten to block Biden’s nominees was a White House representative bringing up Vice President Kamala Harris to convince her the Cabinet was diverse enough.

“I said ‘whoa whoa whoa whoa whoa, wait a minute, I love Kamala she’s my sister,"” she said. “‘She’s brilliant, and she and I came into the Senate together. And she is as Asian as I am, we’re both half Asian. But you would never say to the Black Caucus, you have Kamala, there’s no need to nominate any more members of the Black community to key Cabinet positions. I mean, you wouldn’t even say, hey, you’ve got a white male president, there’s no need to have any more white males in the Cabinet — right? So why would you say that to Asians?"”

“I think that is illustrative of the otherness (in how) AAPI’s have been treated in this country,” she added. “And I do talk about that in the book where I say, you know, you’re always sort of like the other. You’re always having to prove that you’re American enough, that you’re part of this country.”

The Illinois senator’s new memoir, “Every Day is a Gift,” came out March 30. The book shares stories from her life including her recovery after an RPG shot down her helicopter in Iraq and took both of her legs. She also discusses her experiences as a senator, including “Babygate,” when she fought to bring her newborn onto the floor of the Senate, and her experience as an Asian American woman in America.

Duckworth raised the issue of diversity in Biden’s Cabinet following an increase in incidents of anti-Asian hate since the outbreak of the coronavirus pandemic.

“And I will tell you that the White House heard me,” she said. “They responded within 24 hours, and they said ‘absolutely, and we’re starting by putting a very senior staffer in the West Wing who will have the ability to say to the president or have the ability to say to his key advisers, ‘wait a minute, you’ve overlooked this,’ and that person will be of AAPI descent."”

“This is one of those once-in-a-lifetime efforts that is going to really bring America back to the status of a global leader economically and creates just so many jobs in this country that are so badly needed right now,” she said.

Duckworth said parts of the plan will pay for themselves, like fixing leaking water pipelines. She added that the plan could be paid for through increasing the gas tax, although a gas tax increase is not in Biden’s proposal.

“It was actually the trucking industry that came to us and said ‘we’re spending more money stuck in road congestion and fixing and repairing our trucks because of the bad quality of the streets in this country,"” Duckworth said. “‘We would rather raise the gas tax, and pay that because that will save us money in the long run."”

When Karl pressed Duckworth on the gas tax, noting that it would impact all Americans, including those with low incomes, she pointed to tax credits as a way of alleviating that pain.

“I don’t have a problem with going and revoking the tax cuts for the ultra-rich and for large corporations that the Republicans passed just a few years ago. That will not affect working families in this country,” Duckworth said. “So there are ways to do this. I’m happy to be bipartisan about it, but the key thing here is that if we don’t do this, it’s going to cost us more in the long run, in terms of losses to businesses, in terms of where the country will be, in terms of not having the jobs that we need.”

Duckworth also shared her experience during the Jan. 6 insurrection and connected it to the title of her book, which she called “a love letter to America.”

“Betrayal is the best that I can describe how I felt and how I still feel today,” she said. “But after all that, this democracy, this country, despite all of our divides and what happened then, is still worth it. We are– it’s still worth working towards that more perfect union.”