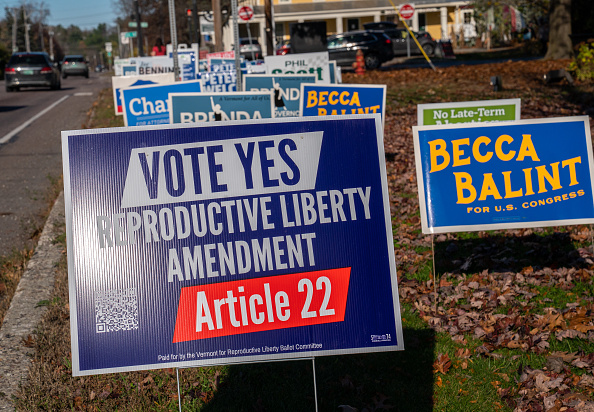 (WASHINGTON) — Despite expectations that inflation and crime would be the foremost issues during the midterms, voters signaled support for protecting abortion rights in several states.

In California, Michigan and Vermont, voters overwhelmingly chose to enshrine abortion rights in their state constitutions, according to ABC News projections.

Meanwhile, in Kentucky, voters rejected a proposed constitutional amendment that would have stated there is no right to an abortion.

Results are still incoming for a proposal by the Montana legislature to change the state constitution to define all fetuses “born alive” as legal persons, including those born prematurely or who survive an abortion.

Abortion rights advocates told ABC News the outcomes of the ballot initiatives show that when the question of abortion access is posed to voters, they are in favor of protecting rights.

In Kentucky, voters said “no” to an amendment to the state’s constitution that would have specified the right to abortion does not exist, nor is the government required to allocate funding for abortion.

Even though a trigger ban went into effect in the state immediately following the Supreme Court’s reversal of Roe, the amendment was defeated 51% to 49%, according to ABC News projections.

The result is similar to what happened in Kansas, where voters in a right-leaning state rejected removing the right to abortion from the state constitution in August despite polling suggesting the opposite would occur.

“I’m ecstatic, but I’m also not surprised,” Tamarra Wieder, Kentucky state director for Planned Parenthood Alliance Advocates, told ABC News. “I mean, this campaign has been working for 18 months, and we’ve been on the ground talking to voters, and we knew that Kentuckians did not support this ban.”

“This transcended political ideologies or religious identities,” Wieder said. “Most people knew somebody in Kentucky that this was directly impacting, and they showed up because they know that abortion is health care and Kentuckians deserve better.”

“Even in a state like Kentucky, the majority of people still support access to abortion care and the majority of the people here still believe that every person should be able to determine their own future and make their own decisions about their body,” he told ABC News. “That’s across party lines. We saw people who don’t support abortion access getting elected last night at the same time that Kentuckians still were voting ‘no’ on permanent abortion bans placed in the state constitution.”

Legal challenges continue against the trigger ban and oral arguments and begin next week in Kentucky’s Supreme Court, something the amendment would have prevented.

There is a pathway in our constitution that we believe allows abortion access through with strong privacy protections,” Wieder said. “And so, with our legal pathway, we’re able to move forward with the two cases next week.”

In Michigan, voters voted in favor of a constitutional amendment that would add protections for reproductive rights, ABC News projects.

The amendment defines reproductive freedom as “the right to make and effectuate decisions about all matters relating to pregnancy, including but not limited to prenatal care, childbirth, postpartum care, contraception, sterilization, abortion care, miscarriage management and infertility care.”

The amendment’s passing represented success for Gretchen Whitmer, who won a second term as governor, according to ABC News projections. Whitmer campaigned on abortion rights and said the proposal restored protections that Roe provided when it was the law of the land.

“I think we are so overwhelmed and so grateful for the voters of Michigan,” Merissa Kovach, the legislative director of the ACLU of Michigan, told ABC News. “They did the work to get [the amendment] qualified for the ballot, they showed up and passed it and it’s such a historic victory that’s going to protect reproductive health care for generations in Michigan, and that our constitution is now going to clearly include the right to reproductive freedom for everyone.”

The recently passed amendment also prevents a 1931 abortion ban — which was declared unconstitutional by a judge — from being enforced. The law, which remained on the books even after it was invalidated by Roe in 1973, prohibited abortion except if the mother’s life is in danger.

According to the ACLU, a petition to get the proposed amendment qualified for the ballot received more than 750,000 signatures.

“It goes to show [voters care about] issues of bodily autonomy and the right of people to be able to make those personal and private health care decisions without political interference,” Kovach said. “It’s so personal and touches every facet of our life, that I think it would be foolish now for anyone to discount the importance of it.”