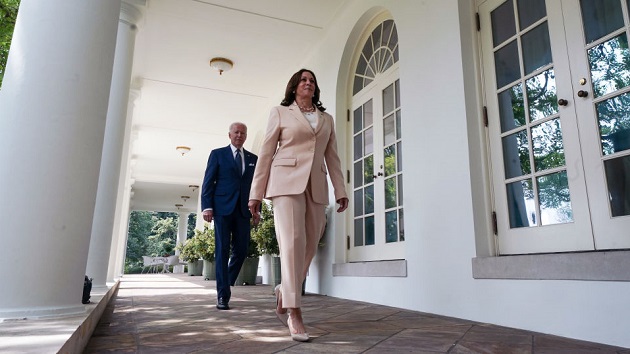 (WASHINGTON) — The Biden administration on Thursday announced a new strategic framework aimed at reducing and managing conditions in Central America that have caused unprecedented levels of migration in recent years.

The strategy resembles much of what the administration has already proposed and focuses on reducing poverty, combating corruption and addressing violence in El Salvador, Honduras and Guatemala. The administration previously dedicated $4 billion in financial support to the region, later saying that substantial portions of the money would not go to Northern Triangle governments and instead would be distributed among nonprofits and aid organizations.

“We’re not seeking to end migration,” a senior administration official told reporters. “It’s part of the fabric of this region, we have so many familial cultural ties to Central America. But we’re seeking to change the ways in which people migrate, provide an alternative to the criminal smuggling, smuggling and trafficking rings, and to give people access to opportunity and protection through safe legal channels, safe legal pathways.”

The strategy is being led by Vice President Kamala Harris who was tasked by Biden earlier this year with addressing the root causes of migration. In announcing the new framework, Harris said the United Nations and Mexico, among others, have committed support.

The administration is also looking to countries like Canada and Costa Rica, one official said, in an effort to provide more options for asylum and refuge.

The announcement comes as Biden continues to try to unwind the immigration enforcement policies of his predecessor, including recently making it easier for migrants to seek humanitarian relief. The Department of Justice announced this week the reversal of another Trump-era policy that immigrant advocates, student organizations and law professors said was part of the prior administration’s limiting of humanitarian protections.

Attorney General Merrick Garland formally rescinded a decision from his predecessor, Attorney General William Barr, which required the Board of Immigration appeals to completely re-decide immigration petitions and asylum cases even if a defendant had made progress in establishing their case. The Barr decision, now reversed, was also expected to exacerbate the growing backlog of cases in immigration court.

A group of more than 350 law firms, professors and advocacy organizations called on the Biden administration earlier this year to repeal a series of decisions made under the Trump administration which limited avenues for migrants to receive a grant of asylum. Monday’s announcement was the final decision to be reversed in that series.

The Biden administration had already reversed a decision from former Attorney General Jeff Sessions that domestic violence and gang violence were not grounds for asylum claims.

The new strategy from Harris also places an emphasis on making humanitarian relief opportunities available in the home countries of would-be migrants. It’s an essential component of reducing the migratory traffic at the U.S. southern border, which has become flooded with asylum-seeking children and families in recent months.