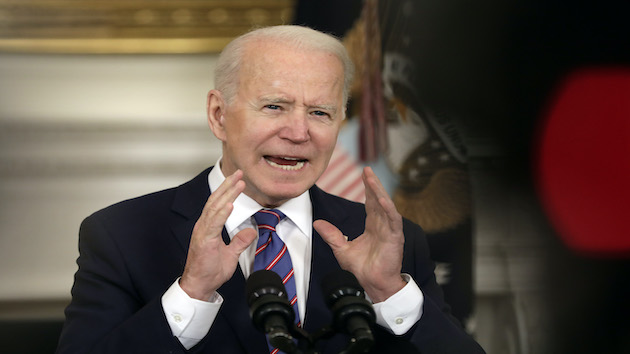 (WASHINGTON) — Four days after President Joe Biden unveiled his massive, multi-trillion-dollar infrastructure plan, the White House is taking steps to sell the policy to the American people as the administration works with Congress on drafting legislation.

In his “Weekly Conversation” — Biden’s version of a weekly address — the president, along with White House press secretary Jen Psaki, National Economic Council Director Brian Deese and Deputy White House National Climate Adviser Ali Zaidi, highlighted elements of the policy while answering questions from the public about the plan.

The strategy of speaking directly to Americans may prove essential as the proposal faces opposition from both sides of the aisle in Congress, with some progressive Democrats saying the investments do not go far enough, while Republican Senate Minority Leader Mitch McConnell said he would fight the bill “every step of the way.”

When pressed on McConnell’s pledge to obstruct, Biden pointed to the important role he believes voters will play in passing the policy.

The White House is hoping to move forward on dual tracks — working to bridge divides in Congress while also making inroads with constituents to build support for the policy and increase pressure on lawmakers.

“Working with my team here in the White House, these Cabinet members will represent me in dealing with Congress, engage the public and selling the plan, and help work out the details as we refine it and move forward,” Biden said at the top of his first in-person Cabinet meeting Thursday.

The group’s work has already gotten underway: In addition to a media blitz to bring their message to the American people, each member of the group was tasked with making calls to the Democratic chairs and Republican ranking members of committees overseeing their respective departments. The members are also slated to hold a series of committee-specific meetings when members are back in session after the Easter break, a White House official said.

The policy, dubbed the “American Jobs Plan” by the White House, goes beyond traditional infrastructure projects, with Biden declaring it “a once-in-a-generation investment in America.”

The plan does allocate $621 billion toward modernizing roads, railways, ports, airports, mass transit and highways, as well as $100 billion to eliminate 100% of lead pipes nationwide.

But it also includes $400 billion for community-based care for elderly Americans, a $180 billion investment in clean energy and $100 billion to build out high-speed broadband across the country.

“The idea that we’re not in a position where we invest in loans and grants to companies and local governments and nonprofits and rural co-ops to be able to come into the 21st century with a minimum requirement of having access to the internet seems to be a very short sighted,” Biden said during his address Saturday.

The White House also took the opportunity to highlight its climate efforts in the bill, which are likely to draw the ire of Republicans.

“This jobs plan upgrades housing. It electrifies transportation. It invests in innovation and it builds out the supply chains that we’re going to need to tackle the climate crisis. And at the same time, it targets 40% of the benefits of the investment in the communities that have been disadvantaged,” Zaidi said during Saturday’s question and answer session, outlining the proposal’s main climate investments.

A White House official said the administration is looking to see “significant progress” by Memorial Day, and Speaker Nancy Pelosi is hoping to get the plan through the House by the Fourth of July, though that timing could slip to later in the month, according to a source familiar with her thinking.

The timeline could create a tough road ahead for the White House as it works to bridge the divides in Congress and get the bill passed, though a White House official stressed they expect there will be more time for consultations and input on the plan than there was for the $1.9 trillion COVID-19 relief measure passed in mid-March without any Republican support.

In an interview Thursday, White House chief of staff Ron Klain said the White House wanted to move forward in a bipartisan way “if at all possible” but didn’t rule out the idea that Democrats could push the plan through without Republican support, as was the case with Biden’s COVID-19 relief plan.

“In the end, let me be clear: The president was elected to do a job. And part of that job is to get this country ready to win the future. That’s what he’s going to do. We know it has bipartisan support in the country. And so we’re gonna try our best to get bipartisan support here in Washington,” Klain said.