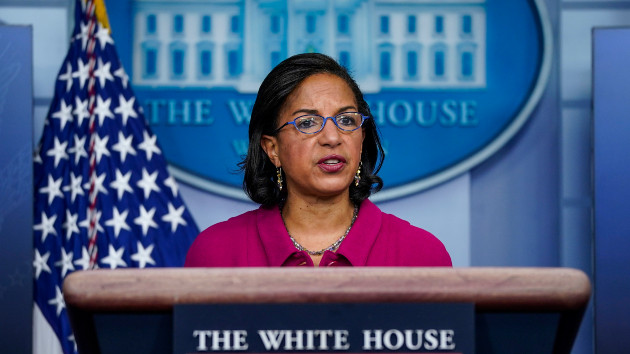 (WASHINGTON) — The director of President Joe Biden’s Domestic Policy Council, Susan Rice, has divested herself of millions of dollars’ worth of holdings in a company that’s leading a contentious pipeline project supported by the Biden administration.

According to newly released financial disclosure reports and a White House official, Rice has liquidated nearly $2.7 million worth of shares she and her husband owned in Enbridge, a Canadian company building the Line 3 pipeline, which would carry hundreds of thousands of barrels of Canadian oil through Minnesota and Wisconsin.

Last month, the Biden administration gave a public boost to the Trump-era pipeline project, calling for the dismissal of a court challenge brought by environmental groups seeking to protect Minnesota watershed and tribal lands from the pipeline.

The Enbridge stock sale is part of a series of large divestments that Rice, one of the wealthiest members of the Biden White House, has recently made or is planning to make in the coming days. Divesting is a common measure that newly appointed public officials take to ensure that their government duties don’t overlap with their personal interests.

A certificate of divestiture issued by the Office of Government Ethics last week shows Rice’s plans to sell holdings in more than three dozen companies and several investment funds that she and her family own — assets currently worth a total of more than $30 million.

Enbridge’s stock price has been on an upward trend since November, and the value of Rice’s holdings in the company has increased from roughly $2.4 million when she joined the Biden administration earlier this year to nearly $2.7 million as of Friday.

It’s unclear if Rice netted any capital gains from the sale of her Enbridge shares, but those who divest assets under a certificate of divestiture are allowed to defer taxes on capital gains.

A White House official told ABC News that during the transition period leading up to Biden’s inauguration, Rice had agreed to divest from all of the listed assets. In the meantime, while waiting for her certificate of divestiture to be issued, she recused herself from matters involving companies in which she had investments.

The official said that as of early this week Rice had divested all of her Canadian assets, including the Enbridge holdings and more than $14 million worth of shares in Canadian Pacific Railway Ltd., as well as many U.S. assets.

Her remaining U.S. stocks are in the process of being divested, a process that will be finished before July 27, the official said.

She will retain major holdings in Canadian banks, including $5 million to $25 million each in the Royal Bank of Canada and the Toronto-Dominion Bank, according to her disclosure reports.

Rice’s certificate of divestiture was first reported by the Daily Poster.

As ABC News previously reported, several other senior members of the Biden administration similarly divested themselves of their assets to comply with ethics rules earlier this year.

Biden’s White House climate envoy John Kerry was issued a certificate of divestiture in March for liquidating $4 million to $15 million in assets from more than 400 companies, including energy-sector interests. In May, Energy Secretary Jennifer Granholm divested $1.6 million worth of shares in electric vehicle producer Proterra.

Kedric Payne, general counsel and Senior Director of Ethics at the good-government group Campaign Legal Center, said that considering the large number of diverse stocks that Rice is divesting, it’s difficult to say whether the timing of the Biden administration’s support for the Line 3 pipeline project and Rice’s divestiture raises any questions.

But he said that Rice’s divestment from those assets shows the highest level of effort to avoid a conflict of interest.

“Ethics laws allow an official to resolve conflicts of interest with recusals, waivers, and blind trusts, but divesting assets is typically the most extreme remedy,” Payne said. “When officials are transparent about conflicts and sell their relevant assets to avoid such conflicts, the ethics laws are working as intended.”