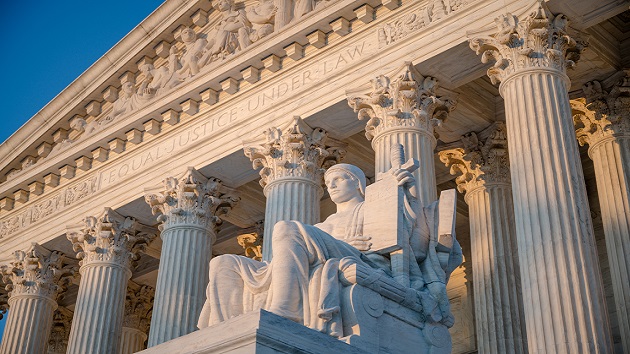 (WASHINGTON) — The Supreme Court allowing an unprecedented pre-viability abortion ban to go into effect in Texas has prompted questions on the status of Roe v. Wade, the 1973 landmark ruling that’s supposed to protect the right to abortion nationally.

To some experts, this marks the end of the line for the right to abortion to be federally protected, especially with an upcoming case soon to be heard by the court that directly challenges Roe.

“Roe v. Wade is dead in Texas, the second-most-populous state,” Elizabeth Sepper, a University of Texas at Austin School of Law professor, told ABC News, “and I think it’s really hanging by a thread for much of the rest of the nation.”

Not overturned, but some say ignored in Texas case

The Supreme Court did not remark on the constitutionality of the Texas law, but it did reject a request for an emergency injunction, citing technical grounds, in a brief so-called shadow docket, allowing the law to go into effect while it’s being legally challenged.

“So we don’t see a citation to Roe v. Wade, we don’t see a discussion of the constitutionality of banning abortion, but here we are, right?” Sepper said. “Abortion is banned in the state of Texas, and that speaks volumes beyond this mealy mouthed sentence and the one paragraph we got from the court.”

In 1973’s Roe and in 1992’s Planned Parenthood v. Casey, the Supreme Court affirmed “the constitutionally protected liberty of the woman to decide to have an abortion before the fetus attains viability and to obtain it without undo interference from the State.”

The Texas law bans physicians from providing abortions as early as six weeks into a pregnancy — well before viability.

“To have allowed that to happen in this procedural way,” said Kimberly Mutcherson, a co-dean and law professor at Rutgers Law School, referring to the Supreme Court, “is something that I would have thought they were at least a little bit too good for, but apparently I was wrong.”

On Thursday, the Department of Justice sued the state of Texas to block the law, with Attorney General Merrick Garland calling it “clearly unconstitutional under long-standing Supreme Court precedent.”

Since the near-total ban in Texas was allowed to go into effect, Republican lawmakers in other states have said they aim to mimic the law.

Priscilla Smith, a senior fellow at Yale Law School’s Program for the Study of Reproductive Justice who argued in front of the Supreme Court in a 2000s abortion case, called the court’s action “cowardly” and “completely lawless.”

“It overturned it in effect in that it’s saying, ‘Here’s how you can get out from under Roe.’ So it’s instructing states on how to do something to make it so Roe doesn’t apply in their state,” she said.

The Texas law is different from previous bans in that it prohibits the state from enforcing the ban, instead authorizing private citizens to bring civil suits against anyone who “aids or abets” an abortion.

With that, Mutcherson said, “they created this sort of confusion and this hook that the Supreme Court was able to use.”

“This kind of tactic is going to be used throughout the country in anti-abortion states to deprive women of federal constitutional protections,” Smith said.

Meanwhile, the Supreme Court has agreed to hear a case this term from Mississippi, Dobbs v. Jackson Women’s Health Organization, challenging another pre-viability ban. The state of Mississippi formally asked the court to overturn Roe as part of that case.

“The Supreme Court’s decision not to decide with regard to the Texas abortion law signals quite strongly, I think, the outcome on the Mississippi 15-week ban on abortion,” Sepper said.

Because precedent might indicate the Texas ban should have been enjoined, Sepper said, “I think that does signal really the end of Roe.”

Smith agreed: “There’s no reason to think they’re not just going to overturn the right itself.”

Since 2018, Chief Justice John Roberts has stepped in as a swing vote on abortion, including siding with the liberal-leaning justices in the latest full abortion case, although his opinion followed more procedural lines.

But the Supreme Court balance has changed since 2018 with former President Donald Trump’s appointments, who have voted more conservatively. Roberts joined Justices Stephen Breyer, Sonia Sotomayor and Elena Kagan in dissenting on the Texas law, but his vote did not make theirs the majority opinion.

“Justice Roberts is no longer the swing vote,” Smith said. “I don’t think there is a swing vote.”

Acknowledging it was “possible” one of the Trump-appointed justices could side with the liberal-leaning justices, Smith said, “There’s no indication that anybody’s going to swing.”

Sepper posited the justices could overtly overturn Roe or do it in a “sneaky, silent sort of way,” like by changing a standard that opens the door for more restrictions and bans.

While the door has arguably been opened for state lawmakers to ban abortion, some argue they may not want to because of potential political repercussions.

A 2019 ABC News/Washington Post poll showed a majority of Americans support the right to abortion, so lawmakers could face backlash from voters if they actually ban it.

Many conservative lawmakers have introduced bills restricting abortion knowing that they would probably never go into effect because they were unconstitutional, Sepper added.

“So these legislators got credit with the anti-abortion activists for passing the laws, but they didn’t have to face the electoral consequences of having banned abortion or denied emergency abortion care,” she said. “The fact that they may soon face those political repercussions is something they’re going to have to think about.”

Texas Gov. Greg Abbott is already facing backlash for the new law’s lack of exceptions for cases of incest or rape.

One way for voters to indicate disapproval is protesting, and while there have been some demonstrations about the Texas law, Smith said she’s surprised there aren’t more.

“And I’m not sure why they’re not, except that people are getting this idea that this is just a procedural move,” she said. “If Dobbs comes through the way the anti-abortion folks want it to, if Roe gets overturned in Dobbs, then maybe people will wake up and hit the streets. But you know, if you’re in a red state right now, you better watch out