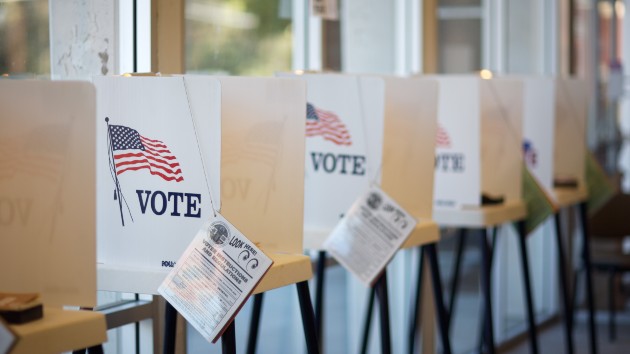 (WASHINGTON) — Arizona’s November election is in the headlines again, after the Republican-led Senate there successfully used its subpoena power to obtain Maricopa County’s 2.1 million general election ballots in order to audit the presidential and Senate races.

But experts said the process is unprecedented when it comes to auditing an election — which was signed off on by Democratic Secretary of State Katie Hobbs, Republican Gov. Doug Ducey and Republican Attorney General Mark Brnovich back in November. The audit cannot retroactively change the results of the election, but experts worry that the act of the audit itself will sow doubt about the results.

The state Senate hired a private firm that has never worked in the election realm before. Some of their practices, such as the storage and handling of ballots, have raised concerns with the Department of Justice’s Civil Rights Division, which weighed in late last week. In a letter to officials, the DOJ division expressed its concerns about possible violations of ballot preservation laws and voter intimidation. Following that letter, the Senate has since scrapped part of the plan to do follow-up canvassing at voters’ homes, but assured the Justice Department that it had plans to do so in a safe and legal manner.

Hobbs said that she met with the DOJ on Thursday, alongside a number of other secretaries of state who have expressed concern about the impact of the audit.

“Every day that this exercise continues, I grow more concerned about what is happening,” she said on a call with reporters. “We appreciate and share the concerns raised by the DOJ, as well as the concerns of my colleagues — other secretaries of state — who are starting to hear calls for similar audits or reviews to be conducted in their states. This is a horrible precedent that has been set here.”

The governor is also now providing security to Hobbs and her family after she received death threats and was followed by a man associated with a far-right media group.

Here’s what you need to know about the GOP-led audit in Arizona:

Months of litigation preceded the audit

The state Senate, which has subpoena power for testimony, compelled this audit. After months of tricky court battles and resistance from the county board of supervisors, the Maricopa County Superior Court ruled that the Senate could subpoena machines and ballots, among other things, as a part of its legislative power.

Republican-led Maricopa County had already conducted a hand recount of ballots there and had different independent firms examine their voting machines in the weeks following the election. Plus, GOP Chairwoman Kelli Ward herself signed off on original county certification of ballots just days after the election.

But, after Trump continued to push doubts about the election results, Republicans used the nationwide momentum in Arizona to push for GOP access to audit ballots which were duplicated by the county. Ward was able to conduct the audit in December with power from a state statute which allows a voter to dispute election outcomes if they suspect illegal votes, misconduct by election officials or an inaccurate vote count.

The Senate president hired the Florida-based cybersecurity company Cyber Ninjas to conduct the audit, but the company has no experience working on elections. Cyber Ninjas’ CEO, on his since-deleted Twitter account, spread misinformation and doubt about the legitimacy of the election, according to the Arizona Mirror.

The company’s website states that they track security vulnerabilities and protect against possible breaches. Fann said that the purpose of the audit is not to sow doubt in the election results, but to use it as a way to see where the state can improve its election administration in the future. The Arizona Capitol Times reported that Fann passed over a more experienced and more expensive company to conduct the audit, instead opting for Cyber Ninjas in an attempt to avoid allocating extra taxpayer dollars toward the cost.

The funding for the audit is a mixed bag of taxpayer dollars and private donations. Fann agreed that the Senate would cover $150,000 of the costs. Far-right One America News Network’s Christina Bobb, set up a nonprofit to help fund the audit and is encouraging her followers to “get the audit across the finish line.”

Actual ballot counters are volunteers, while some are paid, and according to ABC15 in Phoenix, were all required to sign nondisclosure agreements, raising further concerns about a process which has been lauded as transparent by those who are running it.

Drawing further scrutiny is the volunteers’ methods at the Arizona Veterans Memorial Coliseum in Phoenix.

“In typical post-election review procedures, officials review individual ballots and ballot counters make joint decisions about how each ballot should be counted. And in the event of a disagreement there are clear escalation procedures which ensure that that ballot receives additional scrutiny and is properly counted, but not so at the coliseum. At the coliseum … the current procedures do not require all of the ballot counters to agree on how to count that ballot,” Elizabeth Howard, an attorney with the Brennan Center for Justice and audit observer, said in a press call.

A controversy over bias erupted after former state Rep. Anthony Kern, who was on the steps of the Capitol on Jan. 6 and photographed inside an area rioters breached, was pictured participating as a ballot counter for an election where his name was on the ballot as a would-be elector for Trump if he won.

“We are concerned about the lack of a check on independence, objectivity and election administration experience,” Howard said. “And in fact, one of the ballot counters … is a presidential elector and he’s counting ballots that were actually cast for or against him and local press have uncovered a tweet in which he shares that he is attending a stop-the-steal rally in D.C. on Jan. 6.”

The auditors’ objectives are unclear

There have been several conspiracy theories floating around the space where auditors are reviewing the ballots.

One official there said they were looking for traces of bamboo in the ballot paper, which would allegedly indicate that the ballots were smuggled into Arizona from Asia. They are also using 5K cameras to look at the ballots and determine the depth of the indentation, which would allegedly reveal if the ballot was cast by hand or filled out by a machine. UV lights were used by auditors who are searching for alleged watermarks by the Trump administration to show that they were “official ballots.”

One official said he didn’t believe that actual ballots were shipped in from Asia, but the question is “part of the mystery we are trying to un-gaslight people about. And this is how to do it,” he said of the audit.

Washington’s Republican Secretary of State Kim Wyman said on a press call the processes being used are not based on any sort of established election review procedures.

“They have no chain of custody regardless of their made-up procedures and policies that they put out in public. They don’t reach anywhere near knocking on the door of standards that election officials operate,” Wyman said.

“We do it so that we can make those arguments in court if needed, we can back up our policies and procedures and show that we follow the law, and that the election was fair and accurate. They can’t do it. They have now contaminated and corrupted all of those — what is it — 2.1 million ballots that Maricopa County, so meticulously kept control of. Now all of that is gone, so pretty much anything from that day forward is just a crapshoot,” she said.

When does the audit end?

The Senate has access to the Arizona Veterans Memorial Coliseum in Phoenix until Thursday, but it appears auditors will need more time. High school graduations are scheduled there shortly after that date, so there is no chance they can extend their rental.

As of Thursday evening, officials said they are through about 275,000 of the 2.1 million ballots.