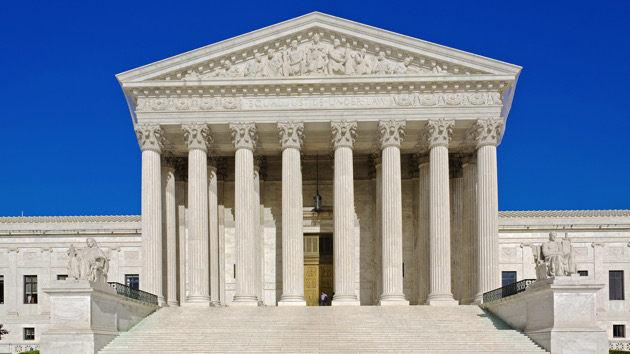 (WASHINGTON) — As Judge Ketanji Brown Jackson — President Joe Biden’s pick for the Supreme Court — is set to face her Senate confirmation hearings beginning Monday, here are some key takeaways about the current process.

After the Senate Judiciary Committee concludes its hearings this week, Republicans can try to slow down Jackson’s nomination by boycotting a committee vote before her nomination heads to the full Senate, but Democrats could try to go forward, anyway.

Republicans did that when Democrats attempted to boycott a committee vote on Amy Coney Barrett.

At that time, Republicans controlled a majority of seats on the panel, so the chairman at the time — GOP Sen. Lindsey Graham of South Carolina — went ahead without minority Democrats. They, instead, left pictures in their places of Americans who, they said, would be negatively affected should Barrett support striking down the Affordable Care Act.

Senate Judiciary Chairman Dick Durbin, D-Ill., says he wants to run a fair process, so he is doing everything he can to get GOP buy-in moving forward. The goal is for Republicans to support the process, regardless of whether they support the nominee.

If Republicans were to boycott the vote, Durbin would have a decision to make: attempt to change the rules, or have her nomination taken directly to the floor by Majority Leader Chuck Schumer.

Should every Republican in committee vote against Jackson, thereby deadlocking the panel, Schumer would have to move to discharge her nomination. That would take a bit more time, potentially endangering Democrats’ goal of having Jackson confirmed to the high court before April 8, when the Senate begins a two-week recess in observance of the Easter holiday.

Filibustering a full Senate vote on Supreme Court nomination is no longer allowed. Republicans lowered the vote threshold to a simple majority for Supreme Court confirmations in 2017 when then-Majority Leader Mitch McConnell, R-Ky., nuked the filibuster rule to get Justice Neil Gorsuch confirmed. Democrats made this move in 2013 for all lower-court nominations.

Hearings and confirmation can happen quickly

Democrats are eyeing a swift confirmation after what happened with Amy Coney Barrett, who out of the nine justices currently serving on the court waited the fewest days (27), according to Congressional Research Service. Justice Stephen Breyer said he will retire at the end of the current term, but a confirmation vote can take place while a retiring justice is still on the bench. That’s what happened when Justice Sandra Day O’Connor was being replaced with Samuel Alito.

The Congressional Research Service found the average amount of time for a nomination to be voted on in the Senate is 68.2 days, just over two months. The median is 69 days. Clarence Thomas waited the longest time — 99 days.

The vice president can break a Senate tie

Although Harvard Law School Professor Emeritus Laurence Tribe has said a vice president, in the role as president of the Senate, cannot cast a tie-breaking vote on a Supreme Court nominee, he appears to be virtually alone in that opinion.

Both Democrats and Republicans, including a former GOP Senate floor manager, have told ABC News — in no uncertain terms — that Vice President Kamala Harris can break any potential tie — and numerous other legal experts agree.