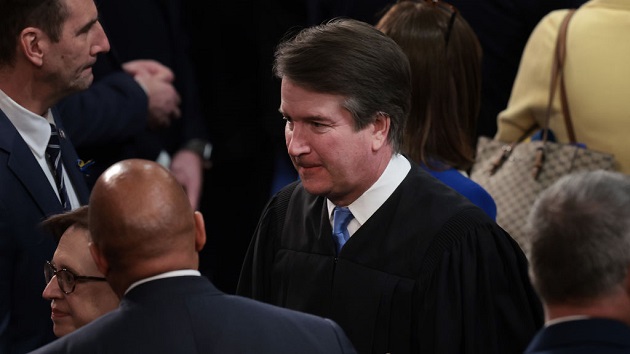 (WASHINGTON) — Comments on abortion rights made by the recent conservative additions to the Supreme Court during their Senate confirmation hearings are under fresh scrutiny after a leaked draft Supreme Court opinion appeared to indicate the panel’s conservative majority of justices is ready to overturn Roe v. Wade.

The Supreme Court confirmed that the draft, published Monday by Politico, is authentic. But it stressed that it is neither a decision by the court nor a final position of any justices in the case.

The case, Dobbs v. Jackson Women’s Health Organization, involves Mississippi’s ban on abortions after 15 weeks of pregnancy — well before the fetal viability standard established by Roe in 1973 and a subsequent 1992 decision, Planned Parenthood v. Casey, that legalized abortion across the U.S.

“Roe was egregiously wrong from the start,” Justice Samuel Alito, the opinion’s apparent author, wrote in the copy of the draft, dated Feb. 10.

An unnamed source familiar with the deliberations told Politico that Justices Alito, Clarence Thomas, Neil Gorsuch, Brett Kavanaugh and Amy Coney Barrett — the latter three who are conservative justices added to the bench during the Trump administration — all initially supported a ruling siding with Mississippi and “that line-up remains unchanged as of this week.”

The document posted online suggests a majority of justices is likely to side with Mississippi — breaking with precedent — but how broad the ultimate ruling will be remains unclear. It also is unclear how the justices will ultimately vote on the case.

During their respective Senate confirmation hearings after being nominated to the Supreme Court by former President Donald Trump, Gorsuch and Kavanaugh acknowledged the precedent set by Roe, while Barrett told senators she believed the decision was not a “super-precedent.”

During confirmation hearings in March 2017, Democrats pressed Gorsuch for his views on abortion using his writing in a book he authored on euthanasia, in which he wrote that “the intentional taking of human life by private persons is always wrong.”

“How could you square that statement with legal abortion?” Sen. Dick Durbin, D-Ill., asked.

“The Supreme Court of the United States has held that Roe v. Wade, that a fetus is not a person for purposes of the 14th Amendment. And the book explains that,” Gorsuch replied.

“Do you accept that?” Durbin asked.

During his Senate confirmation hearings in September 2018, Democrats pushed Kavanaugh on his position on Roe in light of a reported 2003 email he wrote as a lawyer in the Bush White House challenging that the landmark decision was the “settled law of the land.”

“As a general proposition I understand the importance of the precedent set forth in Roe v. Wade,” Kavanaugh told senators.

Sen. Dianne Feinstein, D-Calif., asked Kavanaugh, “What would you say your position is today on a woman’s right to choose?”

“As a judge, it is an important precedent of the Supreme Court,” Kavanaugh replied. “By ‘it,’ I mean Roe v. Wade and Planned Parenthood v. Casey, been affirmed many times. Casey is precedent on precedent.”

Additionally, Sen. Susan Collins, R-Maine, has said Kavanaugh repeatedly suggested to her privately that he considered Roe to be “settled law.” She criticized both Kavanaugh and Gorsuch on Tuesday for the apparent flip-flop.

“If this leaked draft opinion is the final decision and this reporting is accurate, it would be completely inconsistent with what Justice Gorsuch and Justice Kavanaugh said in their hearings and in our meetings in my office,” Collins, R-Maine, said in a statement Tuesday morning. “Obviously, we won’t know each Justice’s decision and reasoning until the Supreme Court officially announces its opinion in this case.”

During her confirmation hearings in October 2020, Barrett was careful in her comments but told senators she believed the decision on Roe v. Wade was not a “super-precedent” when asked directly by Sen. Amy Klobuchar, D-Minn.

She said she did not find the case to be “so well-settled that no political actors and no people seriously push for their overruling.”

“I’m answering a lot of questions about Roe, which I think indicates that Roe doesn’t fall in that category,” she said. “And scholars across the spectrum say that doesn’t mean that Roe should be overruled. But descriptively, it does mean that it’s not a case that everyone has accepted and doesn’t call for its overruling.”

As a law school professor, Barrett signed a 2006 newspaper ad calling for the overturning of the law’s “barbaric legacy.” She was questioned about that as well during her confirmation hearings.

“I signed that almost 15 years ago in my personal capacity still as a private citizen, and now I am a public official,” Barrett told Sen. Josh Hawley, R-Mo.

“I signed it on the way out of church,” she told Sen. Patrick Leahy, D-Vt. “It was consistent with the views of my church and simply said we support the right to life from conception to natural death.”

In response to Republicans’ questions about her faith and its influence on her work, Barrett — who has described herself as a “faithful Catholic” — told senators that her “personal, moral religious views” won’t impact her judicial decision-making.

“I have done that in my time on the 7th Circuit. If I stay there, I’ll continue to do that,” Barrett said. “If I’m confirmed to the Supreme Court, I will do that still.”

In prior comments, Barrett has said she didn’t think the right to abortion would change and it was unlikely Roe would be overturned by a conservative Supreme Court.

“I think some of the restrictions would change,” she said during a 2016 event at Jacksonville University’s Public Policy Institute.

“I think the question is how much freedom the court is willing to let states have in regulating abortion,” she continued.

What we know about the Georgia 2020 election investigation