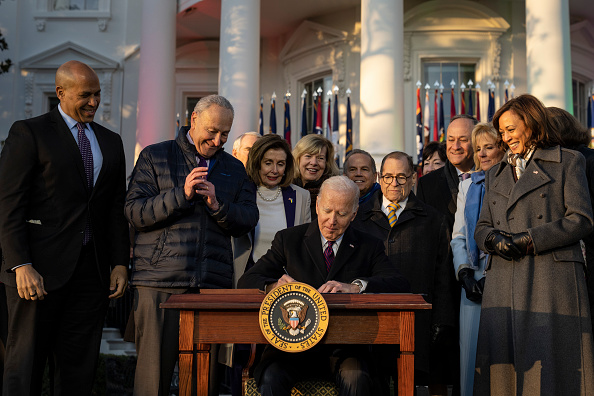 (WASHINGTON) — The Respect for Marriage Act, which will be signed into law on Tuesday by President Joe Biden, is being celebrated as historic by him and lawmakers of both parties.

While the law will guarantee federal recognition of same-sex and interracial marriages, it was passed through Congress essentially as a compromise and as a backstop in case the Supreme Court overruled its prior rulings, which are currently the legal basis for such rights.

Here’s what the Respect for Marriage Act (RFMA) does and doesn’t do:

If the Supreme Court were to overrule either of those precedents — a fear among Democrats and advocates in light of a concurring opinion in the conservative majority’s June ruling to scrap national abortion rights — then the RFMA acts as a limited remedy.

States would be free to deny marriage licenses to same-sex or interracial couples if the Supreme Court precedents were overruled. (Justice Clarence Thomas, in his June concurring opinion on abortion, specifically pointed to Obergefell as having been wrongly decided.)

What RFMA does do is require the federal government and all states to recognize same-sex and interracial marriages if they were legally performed in the past or are performed in the future in places where they are still legal, including other states.

Effectively, this means that all same-sex and interracial couples who are legally married today — some 710,000 same-sex couples as of 2021, according to the U.S. Census Bureau; while about 10% of married households were interracial as of 2012-2016 — and going forward cannot be denied the civil benefits of their unions in any state if court precedents were to be overruled.

RFMA also offers explicit protections for religious groups with moral objections to same-sex or interracial marriages: They are not required to provide goods or services to the marriages they object to and their tax-exempt status cannot be rescinded for refusing to perform or respect a marriage.

Prior to Obergefell, 32 states prohibited or likely prohibited same-sex marriages, according to the National Conference of State Legislatures. Most of those laws remain on the books.

As was the case with states’ abortion laws in the wake of Roe v. Wade being overruled this summer, many of the restrictive state marriage measures would likely snap back into effect if Obergefell was struck down.

In that case, same-sex marriage licenses may be available in some states, but not others. However, under RFMA, marriages legally performed in one state would need to be honored everywhere.

The law does not prevent a state from legally challenging Obergefell or Loving — or the Supreme Court from revisiting those decisions, as Justice Thomas has called for.

There is currently no legal case headed to or before the court on these issues, however. It’s not clear that a sufficient number of justices would have the appetite to heed Thomas’ call.