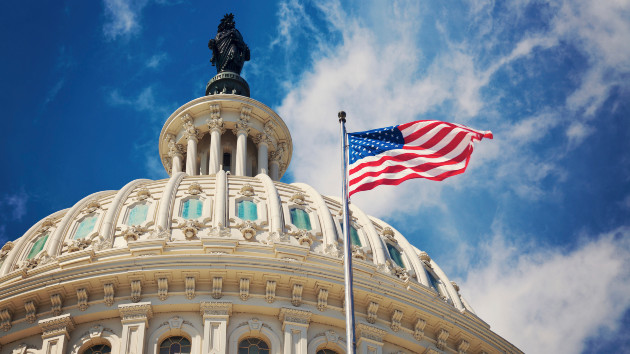 (WASHINGTON) — Democrats had barely a few days to enjoy their 51-seat majority in the Senate until Arizona Sen. Kyrsten Sinema announced Friday morning she was leaving the Democratic Party and registering as an independent.

The big question now: What does it mean for Democrats?

The bottom line: Sinema’s shift will not change the balance of power in the Senate.

But it will give Democrats less breathing room than they were hoping for.

Sinema has already been a key holdout on parts of the president’s domestic agenda — a thorn in the side of progressives.

“I’m not really spending much time worrying about what the mechanics look like for Washington, D.C.,” she said.

The Senate’s two other independents — Vermont’s Bernie Sanders and Maine’s Angus King — caucus with Democrats, giving the party more leverage. Sinema is not promising to do the same, but Democrats rarely see her in caucus meetings as it stands now.

The good news for Democrats is that Sinema does intend to keep her committee assignments, securing the party a one-seat advantage on every panel. As opposed to having tied member representation on Senate committees, the extra seat means it will be easier to confirm judicial and executive nominees.

Sinema maintained throughout her media rollout Friday that she plans to keep her committees and voting record, insisting that “nothing will change about my values or my behavior.”

Democrats also still have Vice President Kamala Harris’ tie-breaking vote in their back pocket. While Sinema has made clear she doesn’t intend to vote differently than she currently does — and right now, her voting record is in favor of Biden’s agenda 93% of the time — if she does cast a vote with Republicans that leads to an even vote split on the floor. Harris would still hold the gavel to break that tie.

The timing of Sinema’s announcement is notable given that she waited until after Tuesday’s Georgia runoff election to announce her move, putting a damper on Democrats’ victory lap.

Schumer had just ticked through the advantages of having a 51-seat majority, flashing a big 5-1 with his fingers and thanking Harris for her work on the Hill, promising she would now have more time for other vice presidential priorities.

A few hours after her political bombshell, he responded in Twitter, “She asked me to keep her committee assignments and I agreed. Kyrsten is independent; that’s how she’s always been. I believe she’s a good and effective Senator and am looking forward to a productive session in the new Democratic majority Senate.”

Looking to 2024, when her Senate seat is up for grabs, Sinema faces what promises to be a tough race in Arizona during what’s shaping up to be a potentially punishing year for Democrats. Other moderate Democrats like Sen. Joe Manchin of West Virginia and Sen. Jon Tester of Montana also face reelection in 2024.

Now that Sinema is an independent, she could face a Democratic challenger in the general election if she decides to run, but she would avoid a primary race.

Democratic Rep. Ruben Gallego, first elected to represent Arizona in Congress in 2014, had been appearing to gear up for one with Sinema. Earlier this week when Biden visited the Grand Canyon state, one he avoided ahead of the midterm elections, Sinema was notably not with him. Sen. Mark Kelly, fresh off his reelection which he won, in part, by breaking from Biden, did join the president, along with Gallego, considered a rising star in the Arizona Democratic Party.