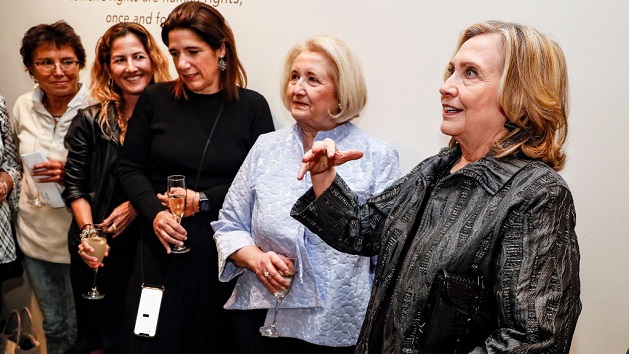 (WASHINGTON) — Reproductive rights were top of mind for Hillary Clinton and others at the grand opening of the new Global Embassy for Women in Washington, D.C., on Thursday — just days after an unprecedented Supreme Court leak revealed a draft opinion overturning Roe v. Wade.

“I know this is quite an ironic week for us to be opening the headquarters, but in a way, it’s probably appropriate because no advance is ever permanent,” said Clinton, former first lady and secretary of state, before hosting a panel on the state of women’s rights. “There are always forces at work to turn the clock back, particularly on women and we know there still is a double standard about what is or is not expected and appropriate for how women make the choices in our own lives.”

The headquarters was established by Vital Voices, an international nonprofit that invests in women’s leadership and empowerment. It was founded in 1997 by the late former Secretary of State Madeleine Albright, Clinton and Melanne Verveer, former U.S. ambassador for global women’s issues.

Clinton described the recent Supreme Court revelation and state-level abortion restrictions as hurdles to progress while touting the embassy as a call to action and a place for women leaders to gather, plan and mobilize.

“We’re not going back and we are not giving in,” Clinton said. “We’re going to do everything we can to organize and agitate and motivate everyone we can reach [to ensure] the forward movement of progress that has been the hallmark of this great country of ours.”

The Center for Reproductive Rights estimates that up to 25 states could outlaw abortion entirely if the draft opinion holds.

In an exclusive interview with CBS News on Thursday, Clinton called the prospect “incredibly dangerous,” and said Americans should take action at the ballot box in November’s midterm elections.

“It is not just about a woman’s right to choose, it is about much more than that. And I hope people now are fully aware of what we’re up against, because the only answer is at the ballot box, to elect people who will stand up for every American’s rights,” she said. “