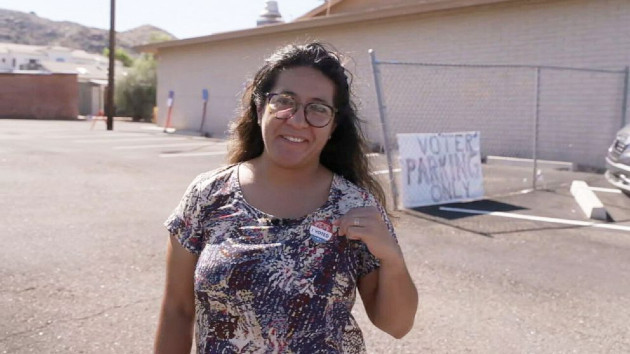 (PHOENIX) — As Yesenia Cruz-Bejarano emerged from the Moose Lodge, an early voting location in South Phoenix, tears streamed down her face even as she smiled brightly with joy.

“I’ve been here for so long, you know, more than half of my life. So, I feel so proud,” said Cruz-Bejarano, who had just cast her first ballot as a newly-naturalized U.S. citizen. “I’m happy that I can make a difference, you know, with my vote.”

The married mother of three from Mexico, who works full-time at a local children’s shelter, is among a highly diverse wave of new American voters that could play a critical role in one of the hottest political battlegrounds of the midterm elections.

More than 64,000 immigrants gained citizenship in Arizona since 2016, according to a report last month by a coalition of immigrant, labor and voting rights groups in partnership with researchers at the University of California, San Diego.

“Arizona is at the top of the list of states for newly-naturalized voters,” said Nicole Melaku, executive director of the National Partnership for New Americans, a nonpartisan, nonprofit group that sponsored the report. “We know that they will play an outsized role in determining the fate of the U.S. Senate and, of course, their state legislative body.”

Melaku points out the 2020 presidential election in Arizona was decided by just over 10,000 votes. The voting bloc of newly-naturalized citizens is more than six times that margin.

“In order to have a better future, we need to show up and vote and elect those that represent our values,” said Eduardo Sainz, a father of three who recently became a naturalized citizen after waiting 16 years in line. “We have to take out racist politicians out of office.”

Arizona’s population of naturalized American voters is a racially and ethnically diverse mix of immigrants from all over the world. More than half immigrated from Latin America and a third came from Asia, according to the report. Both groups of new citizens have a historically high rate of voter participation.

The issues most important to them mirror those of the U.S. electorate more broadly, Falcon said, sharing concerns about the economy, health care, education, immigration and abortion rights.

“No voting bloc is a monolith, but they are most certainly not all Democrats,” said Melaku, “and they’re certainly people who need to be engaged, courted to really fully understand the issues at stake.”

Tuach Ruon, a father of five, and Tema Patrick, father of six, became U.S. citizens earlier this year as refugees from north and central Africa. Both now have union jobs working the overnight shift at a distribution warehouse — and both said health care is a top issue.

“In my native Congo, I never vote,” said Patrick, 45, who explained in broken English that he had never been able to cast a ballot. “This is my first time. I’m very happy.”

Researchers say the newest Arizona voters are disproportionately young and female: More than half are under the age of 45 and nearly 6-in-10 are women.

“Self autonomy is a very big thing, specifically to women, non-binary individuals, anyone,” said Arisbeth Valenzuela, who became a U.S. citizen in 2019 and is now a grassroots organizer with Mi Familia Vota, a civic engagement group.

“There’s been a lot of women that have the same concerns that I do, and a lot of them are now getting much more invested in politics,” she said.

Overall, Arizona is home to nearly half a million naturalized citizens that comprise more than 6% of the state’s total population. Nearly one-fifth of those immigrants joined the voter rolls since 2016.

“We have a diversity of new people that are changing the electorate of Arizona,” said Arizona State University political scientist Irasema Coronado.

Their political power may depend in part on the ability to navigate new state voting restrictions, advocates said.

“That really could have a negative impact for voter behaviors, but we’re actually feeling quite hopeful that this year,” said Melaku, whose group is spearheading outreach to newly-minted American citizens.

“This is a powerful, rising voting bloc of people who are most likely bilingual, multicultural, come from, you know, diverse families and, of course, who care about a lot of issues,” she said.

Cruz-Bejarano said the responsibility and excitement of being a new voter instills a natural sense of engagement.

“There’s so many people becoming American citizens,” she said. “I have a lot of friends, you know, they are doing it right now. It’s — I think it’s really going to make the difference.”