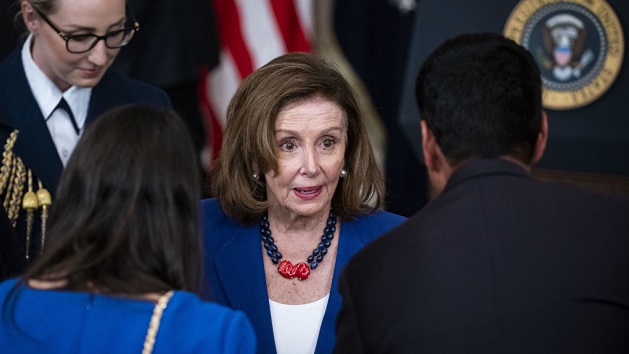 (WASHINGTON) — With masks no longer required and mitigation measures seen by some as a thing of the past, a coronavirus resurgence is spreading among the tight circles of the Washington elite.

Pelosi, 82, is currently asymptomatic, according to a spokesperson for her office.

“The Speaker is fully vaccinated and boosted, and is thankful for the robust protection the vaccine has provided,” the spokesperson said Thursday. She said Pelosi received her second booster shot last month.

Pelosi’s positive test comes amid a flurry of other positive cases among individuals who attended the elite Gridiron Club Dinner in Washington on Saturday.

As of midday Thursday, at least 32 guests at Saturday’s dinner have tested positive for COVID-19, Tom DeFrank, the president of the Gridiron Club, told ABC News.

Attorney General Merrick Garland, Commerce Secretary Gina Raimondo, Reps. Adam Schiff, D-Calif., and Joaquin Castro, D-Texas, and Jamal Simmons, the communications director for Vice President Kamala Harris, were among the guests at the dinner who announced this week that they have tested positive.

“Senator Collins has tested positive for COVID-19 and is currently experiencing mild symptoms. The Senator will isolate and work remotely in accordance with CDC guidelines,” a statement from her office said.

Although some attendees were wearing face coverings, most guests were not wearing masks, DeFrank said.

Among those close to Biden who have tested positive is his sister, Valerie Biden Owen, who also attended the dinner Saturday. She is experiencing mild symptoms, her publisher said in a statement on Thursday.

Rep. Angie Craig, D-Minn., who attended the Tuesday event with Biden and Harris, announced she tested positive Thursday and was experiencing mild symptoms.

Psaki, who recently tested positive for a second time, told reporters on Wednesday that the White House continues to take “stringent” and “strict” protocols to protect the president from potential infection.

“We take additional measures that go beyond what the C.D.C. protocols and requirements are to ensure that we are doing everything we can to keep the principals safe, the president, the vice president and others in the building,” Psaki said.

When asked by ABC News whether the White House plans to test the president daily in the coming weeks, given the uptick in COVID-19 cases seen across Washington, Psaki said that such measures have “not deemed to be necessary at this point.”

The vice president also had brushes with the virus in recent weeks. In addition to Simmons testing positive this week, her husband Doug Emhoff contracted the virus in mid-March.

Harris will follow guidance from the Centers for Disease Control and Prevention, which recommends that individuals who are up to date on their vaccinations get tested at least five days after interacting with someone with COVID-19, according to her office. As no quarantine is needed, she will continue with her public schedule.

Separately, Washington, D.C., Mayor Muriel Bowser joined the growing list of those infected with COVID-19, tweeting on Thursday morning that she had tested positive for the virus.

The mayor said she is experiencing “allergy-like symptoms.”

The district is currently at a “low” community level for COVID-19, per CDC standards.