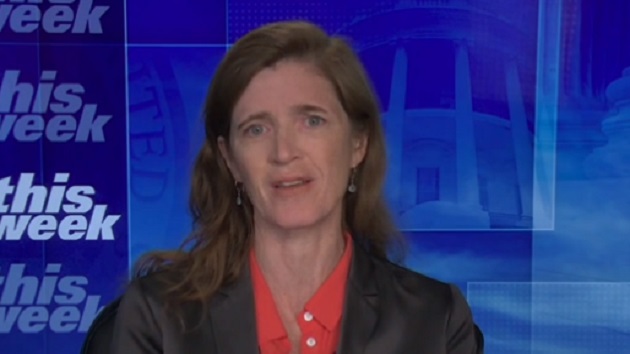 (NEW YORK) — Samantha Power, administrator of the U.S. Agency for International Development, said the costs of the war in Ukraine include global food and fertilizer shortages, impacting prices for consumers and farmers around the world.

“It is just another catastrophic effect of Putin’s unprovoked invasion of Ukraine,” Power told ABC “This Week” anchor George Stephanopoulos on Sunday.

“We’ve gone to Congress asking for a substantial increase in humanitarian assistance…in order to be able to meet those needs,” Power said. “But we’re also active, of course, in more than 80 countries around the world. … We’re working with farmers to also increase their production so that you actually have more supply brought on market.”

“But we really do need this financial support from the Congress to be able to meet emergency food needs,” she later added, “so we don’t see the cascading deadly effects of Russia’s war extend into Africa and beyond.”

Not only are there food shortages globally, but there is also a growing demand for fertilizer from farmers looking to protect their crops.

“Fertilizer shortages are real now because Russia is a big exporter of fertilizer. And even though fertilizer is not sanctioned, less fertilizer is coming out of Russia,” Power said. “As a result, we’re working with countries to think about natural solutions like manure and compost. And this may hasten transitions that would have been in the interest of farmers to make eventually anyway.”

Stephanopoulos pressed: “Listening to you lay out these consequences, it’s hard not to conclude that in some respects this has already become something of a world war.”

“Certainly in terms of effects, not confined to the horrors that the Ukrainian people are suffering,” Power responded.

Power pushed back on the idea that high food prices are due to the Biden administration’s sanctions on Russia, saying instead it’s the result of Russia’s “unwillingness now to come to the negotiating table.”

“That is what is causing these cascading effects,” she said, “so we want to meet those effects, but continue to ensure that that pressure is put on the Russian Federation through economic sanctions and through the security assistance so that they finally negotiate a peace.”

Power, a former U.S. ambassador to the United Nations, said Ukraine’s European neighbors are handling the influx of Ukrainian refugees “remarkably well,” and the dire situation within Ukraine’s borders is where the greatest hardship is.

“I think the bigger challenges lie within Ukraine,” Power said. “It goes without saying that in places like Mariupol that haven’t been reached by meaningful humanitarian assistance in two months, where you have people dying of starvation, of dehydration,” she said.

“You’ve seen images this week of babies who are wearing diapers that are plastic bags taped together as diapers and women so cold that they’re in that steel plant wearing the uniforms of steel plant workers, shaking, having been injured, no access to trauma care,” she added. “I mean, those are the true horrors that are being perpetrated right now.”