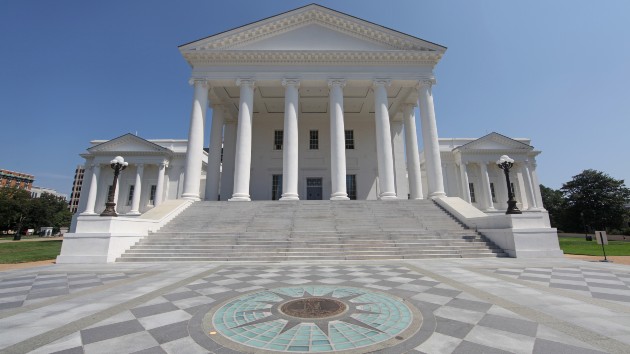 (RICHMOND, Va.) — Virginia Republicans are set to pick a nominee for this year’s gubernatorial election at a convention on Saturday, testing the lasting strength of Trumpism in a state that has deepened its blue hue during former President Donald Trump’s tenure.

In a crowded race with no clear front-runner, ties to Trump and his stalwarts are shaping its contours. The Republican contenders have largely embraced him and earned endorsements from some of his close allies — ostensibly hoping to reflect the zeal of his base to claim the GOP nomination for the commonwealth’s top job.

The race features seven candidates but it has splintered into two tiers, with the upper echelon widely seen as narrowing to four: state Sen. Amanda Chase, state Del. Kirk Cox, entrepreneur Pete Snyder and former hedge fund investor Glenn Youngkin. The other three contenders are Sergio de la Peña, a former official in the Department of Defense under Trump, Peter Doran, a businessman and author, and Octavia Johnson, the former sheriff of Roanoke. And while none are disavowing Trump, the level of passion among the candidates towards him isn’t quite the same.

“You could categorize them in the three silos: Trumpy, Trumpier and Trumpiest,” said Larry Sabato, the founder and director of the University of Virginia’s Center for Politics.

That dynamic has manifested perhaps most in the debate over election integrity, which has become a focal point in the contest after Trump claimed repeatedly and without evidence that rampant fraud cost him the presidency — eroding confidence in the system.

Youngkin, who earned the endorsement of Texas Sen. Ted Cruz this week, formed an “Election Integrity Task Force” to “ensure election integrity.” Snyder, who unsuccessfully ran for lieutenant governor in 2013 and scored the endorsement of former White House press secretary Sarah Huckabee Sanders in his current bid, outlined an election integrity plan. His proposal calls for tightening voter ID laws and implementing signature matching for absentee ballots to address perceived voter skepticism about the security of the electoral system. And Cox, a former state House speaker who acknowledged Biden’s victory back in December, has also pushed for election reforms in Virginia.

Only one of the candidates has directly invoked Trump’s unfounded allegations of election fraud in the campaign. According to Chase, a self-proclaimed conservative firebrand who labels herself as “Trump in heels,” the last election was stolen from the former president.

Chase’s penchant for inviting controversy has underlined her bid. The two-term state lawmaker attended the “Stop the Steal” rally ahead of the Capitol insurrection on Jan. 6. She was also censured by her colleagues in the state Senate for, in part, praising pro-Trump rioters inside the Capitol as “patriots.”

Chase’s claims of a rigged election also don’t end with 2020. They extend to her own race, too.

The decision to move forward with a convention, in her telling, was a concerted effort to “sabotage” her nomination. The bar for success is higher in conventions than in primaries since a candidate must secure a majority of the vote, rather than a plurality, to emerge as the winner.

A spokesperson for the Virginia Republican Party declined to comment on Chase’s accusations.

The bumpy road to the convention has also led other candidates to raise concerns about the integrity of the nomination process. Chase, Youngkin and Cox sent a joint letter to the state party expressing reservations about its plans for ballot security and vote counting.

“All elections must be free, fair, and transparent. The Republican Party—the party of election integrity—must lead by example as it prepares to conduct its May 8 nominating convention,” the candidates and rivals wrote to the state party chair.

Despite the apprehension, the state GOP is expecting the convention to “go 100% smoothly,” said John March, the communications director for the Virginia GOP.

“Our chairman and other folks have talked to (the candidates) to make sure everybody’s feeling comfortable and everybody is on the same page,” he added.

In the off-year contest, a first referendum on the Biden administration and Democratic control of Congress ahead of the 2022 midterms, Republicans see the race as an opportunity to reverse a string of statewide losses. And history is on the GOP’s side, with Virginia typically electing governors from the party not in the White House.

But one candidate who defied that trend — former Gov. Terry McAuliffe, who narrowly defeated Republican Attorney General Ken Cuccinelli in 2013 — is hoping to do it again. Virginia state law doesn’t allow for sitting governors to seek back-to-back terms.

McAuliffe, the front-runner in the Democratic race, is competing against four other candidates for the party’s nomination: state Sen. Jennifer McClellan, former state Del. Jennifer Carroll Foy, Lt. Gov. Justin Fairfax and state Del. Lee Carter. Voters will elect a nominee in a primary set for June 8, which Sabato predicted will be McAuliffe — although “strange things happen in the final days” of a campaign, he added.

He also warned that despite their gains in the last decade, Democrats shouldn’t consider a win a foregone conclusion.

“If you think you can’t lose, you’re halfway to losing,” he said.

Sabato called Cox a “credible candidate,” noting his years in the legislature, and underscored Youngkin’s personal wealth — a mighty asset for gaining name recognition and criticizing an eventual opponent on the airwaves.

And being too Trumpy could ultimately prove detrimental down the line, Sabato argued.

Trump himself hasn’t found success in Virginia, and neither have Republicans. Trump’s losing margin in 2020 was the most significant for a presidential candidate in Virginia in three decades and voters in the state handed Democrats full control of governing in the Trump era.

“Donald Trump continues to dominate the stage,” Sabato said. “(It’s) impossible for people to separate the party from Trump. And that is going to hurt whoever emerges as the nominee. No ways about it.”

Still, all four are betting on a pro-Trump strategy to propel them to the nomination, when nearly 54,000 delegates — the party’s faithful — gather at more than three dozen voting locations across Virginia to pick the nominee.

The months leading up to the “unassembled” convention — which Sabato called a “giant game” — were marred by internal divisions within the state GOP, with party officials feuding over the format for selecting nominees for governor, lieutenant governor and attorney general. The standoff simmered after the party’s governing body approved rules for the convention, but some still pushed for a traditional primary up until the end.

The complicated convention process involves a smaller fraction of voters who were pre-approved by local GOP committees and ranked-choice voting. The delegates rank each of the candidates in order of preference on a ballot, which will be counted by hand at a central location starting on Sunday and could take multiple days.

“We are equipped to remain in place all the way through Thursday,” Rich Anderson, the chairman of the Virginia Republican Party, told Virginia Scope. “We’ve planned toward the longest case scenario but my estimation is, hopefully, at the latest, will be done on Tuesday.”

If there isn’t a clear winner in the first round, there will be subsequent rounds of voting with second and third choices, or more, possibly coming into play until one candidate emerges with 50% plus one vote.