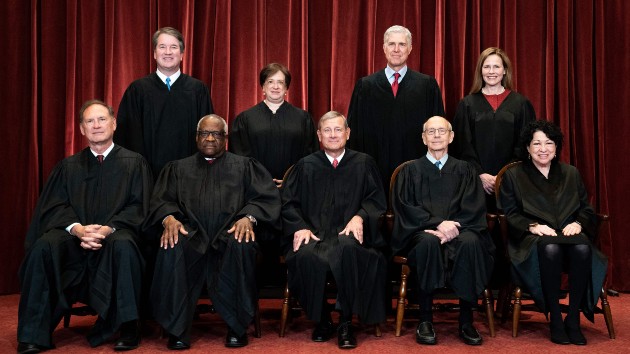 (WASHINGTON) — All nine justices of the U.S. Supreme Court met in person Friday for the first time in nearly a year and since Justice Amy Coney Barrett joined the bench following the death of Justice Ruth Bader Ginsburg.

The justices also posed for a formal photograph with their newest member, Justice Barrett, giving the public its first and likely only glimpse of all nine robed members together since cameras are not allowed in the courtroom.

None of the justices are seen wearing a mask. All nine members of the court have been fully-vaccinated for COVID-19, a spokeswoman said.

The meeting, a weekly private conference to discuss cases, was held inside the Supreme Court building across from the Capitol, where lawmakers are debating possible expansion of the bench and possible term limits — changes the current justices oppose.

“The conferences are confidential. Only the justices participate. Each Justice, in turn, presents his or her point of view; and then there may be responses and more general discussion,” Justice Stephen Breyer said of the meetings in a speech at Harvard University this month.

The gathering marks a new chapter for members of the nation’s highest court after months spent with limited personal interaction, hearing arguments and drafting opinions remotely due to the pandemic.

With its new six-member conservative majority, the court has displayed overwhelming unity so far in cases argued and decided this term, which began in October 2020.

Sixty percent of the decisions delivered have been unanimous, according to an ABC News analysis.

“There must be one opinion ‘for the court,’ to guide the public,” Breyer said, “and that fact often means that compromise is necessary.”

The justices’ ability to compromise will be tested further in the coming days as they prepare to hand down consequential rulings in cases involving the Affordable Care Act, LGBT foster care, union organizing, voting rights and campus free speech.

“We disagree about how to get there, but I don’t start with impugning their motives,” Justice Sonia Sotomayor said in a rare joint public appearance with Justice Neil Gorsuch this month. “We all fundamentally respect each other.”

Gorsuch added, “Everybody focuses on the few cases where Justice Sotomayor and I tend to disagree this year, OK. It happens. We do it respectfully – even lovingly sometimes.”

While the justices convened in-person for their weekly conference, the court itself remains closed to the public. Oral arguments scheduled for April and May will be conducted via teleconference given public health concerns around large indoor gatherings, the court has said.