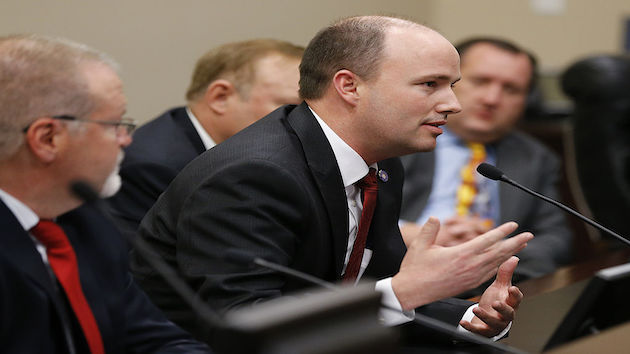 The state House and Senate each gathered the necessary two-thirds of votes to override Cox’s veto Friday. The ban will take effect July 1.

He wrote that he chose to veto it “because the bill was substantially changed in the final hours of the legislative session with no public input and in a way that will likely bankrupt the Utah High School Athletic Association and result in millions of dollars in legal fees for local school districts.”

Adams responded by vowing to override the veto.

“Doing nothing is taking a step backward for women. Finding a solution to this complicated issue is necessary to maintain fair competition now and in the future,” Adams said in a March 22 online statement.

HB11 initially allowed trans participation in girls’ sports and proposed that a commission decide if there is a threat to safety or fairness against cisgender girls in competitions.

However, on the last day of the legislative session, a substitute of the bill was introduced to implement an all-out ban on transgender women’s participation in sports, and the commission would only come into play if a court prohibited the ban.

“It is important to note that a complete ban was never discussed, never contemplated, never debated and never received any public input prior to the Legislature passing the bill on the 45th and final night of the session,” Cox wrote.

Cox warned that school districts will also be liable for any lawsuits to come from this ban.

He states that only four trans students are playing sports in the state, with only one athlete in girls’ sports, and they are not unfairly dominating. He said the high rates of mental health challenges transgender youth face due to discrimination also influenced his decision.

“Four kids who are just trying to find some friends and feel like they are a part of something. Four kids trying to get through each day,” Cox said.

He added, “Rarely has so much fear and anger been directed at so few. I don’t understand what they are going through or why they feel the way they do. But I want them to live.”

Cox warned legislators that he also plans on calling a special session to change the section of the bill in order to avoid bankrupting the athletic association and local schools if they override his veto.

Indiana Gov. Eric Holcomb has also vetoed a transgender sports bill this week and is also facing attempts from the legislature to override his decision.

At least 11 other states have implemented bans against transgender athletes.