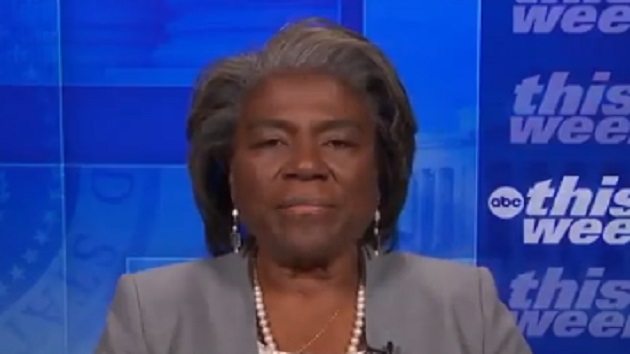 (NEW YORK) — The U.S. Ambassador to the United Nations Linda Thomas-Greenfield is standing by the White House and NATO allies’ opposition to implementing a no-fly zone over Ukraine.

“President Biden has been very, very clear that American troops will not be put on the ground or in the air to escalate this war and make this an American war against — against the Russians,” she told ABC “This Week” anchor George Stephanopoulos. “But we’ve also been very clear that we will support Ukraine in every other way possible.”

Thomas-Greenfield said the U.S. will continue to support Ukrainian President Volodymyr Zelenskyy “in every other way possible” after Zelenskyy angrily denounced NATO’s refusal to impose a no-fly zone and blamed the West for “all the people who will die from this day.”

In a Zoom briefing with members of Congress on Saturday, Zelenskyy said if a no-fly zone couldn’t be implemented, Ukraine needs fighter jets to defend itself against Russia’s invasion. The White House told ABC News the administration is working with Poland to transfer Soviet-era jets from that country and looking into possibly repaying Poland for them.

Asked by Stephanopoulos, “Is that on the table, is that going to happen?” Thomas-Greenfield said the U.S. is in “close consultations” with the Polish government and NATO allies.

“We have not in any way opposed the Polish government providing these — these jets to — to Ukraine and we’re working, as you noted, to see how we can backfill for them.”

Pressure is growing from Democrats and Republicans for the White House to impose tougher sanctions on the Kremlin, including a ban on oil imports from Russia, but Thomas-Greenfield reiterated the White House’s hesitation to do so.

“The president has been clear with President Putin that the consequences of his actions in Ukraine will be felt and it will be felt by the Russians. At the same time, we’re trying our best to minimize the impact on our own country, on our own energy security, as well as the energy security around the world.”

She said Biden remains in discussions with NATO partners and his closest advisors on how to address energy issues while adding that sanctions imposed by the U.S. and allies have already had an impact on the Russian economy.

“The ruble is worth less than a penny right now. The Russian Central Bank is — is not being — not functioning completely, the stock market has been closed. So the sanctions are having the impact and Putin is feeling the results of those sanctions.”

Biden said last week it was still “too early” to determine if Russia has committed war crimes in Ukraine, even after the targeting of civilian areas and a nuclear power plant. When Stephanopoulos pressed her on evidence of shelled kindergartens, orphanages and hospitals, asking, “Isn’t that a war crime?” Thomas-Greenfield said, “any attack on civilians is a war crime.”

“We’re working with partners to collect and provide information on this so that we could investigate this and have it ready in the event that war crimes are brought before this government.”

When asked by Stephanopoulos “what kind of incentives can the United States and the West offer” Putin to move forward with a negotiated peace treaty, Thomas-Greenfield said a return to negotiations is “still on the table.”

“Putin has made the decision that he wants to continue with confrontation, with escalation with attacks on civilians and to move forward with this war that Russia is feeling as much as anyone. We’re seeing that hundreds of Russian troops are being killed every day. Russians are demonstrating in the streets against this. So clearly President Putin is feeling the consequences of his actions, but I can’t explain why he’s — he has continued to move forward in the aggressive way that he’s continuing to do in Ukraine.”