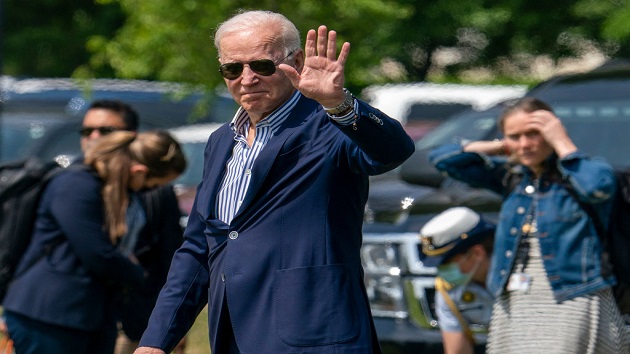 (WASHINGTON) — After assessing the intelligence and raw data before them, it became apparent to Biden and his top officials that a large cache of information had yet to be fully analyzed — officials told ABC News — potential evidence that could hold clues to the virus that has claimed the lives of more than 3.5 million people. The existence of unexamined intelligence was first reported by the New York Times.

“What did they maybe miss in the past? what can we collect now? what determination can we make? And what are we going to do about it?” asked Mick Mulroy, a former top official with the CIA and Defense Department, a deputy associate defense secretary for much of President Trump’s administration and an ABC News contributor.

Intel officials must now “redouble their efforts” to analyze the data, Biden said this week.

As far back as Thanksgiving 2019, U.S. intelligence officials warned a contagion was moving through China’s Wuhan region, changing life and business patterns, and posing a threat to the population, ABC News reported in April 2020, based on information from four sources briefed on the secret reporting.

That fall, several researchers inside the Wuhan Institute of Virology took ill, before the first identified case of the outbreak, with symptoms “consistent with both Covid-19 and common seasonal illnesses,” the State Department said in January, and then sought hospital care, according to The Wall Street Journal.

“There were warnings about COVID early on,” Mulroy said, “and that’s likely one of the things authorities will look at now.”

It wasn’t until Dec. 31, 2019, that the World Health Organization’s China office was informed of “cases of pneumonia” of “unknown cause” detected in Wuhan.

In late summer and early autumn of 2019, though, satellite imagery shared exclusively with ABC showed dramatic spikes in auto traffic around major hospitals in Wuhan — suggesting the virus may have been present and percolating through the region much earlier than when the world was alerted, according to a June 2020 Harvard Medical School study.

The thorough review ordered by the president will include using computerized artificial intelligence systems and analysts to mine everything from raw statements to social media comments, classified records like intercepted phone and electronic communications stored throughout the sprawling U.S. intelligence community, and among organizations like the CIA, National Security Agency and Defense Intelligence Agency.

“There’s a lot of information we have gained, but there’s much more to be learned,” Jamie Metzl, a former national security official in the Clinton administration, current adviser to the WHO and Atlantic Council senior fellow, told ABC News. Metzl leads a group of two dozen scientists, which has long called for a deeper, independent probe into COVID-19’s origins, including a potential lab leak.

Consensus among top officials in the Biden administration is that the pandemic originated in one of two ways: the virus emerged from human contact with an infected animal; or, from a laboratory accident — diverging from the WHO-led team’s report this spring, which ruled the lab-leak theory “extremely unlikely.”

Both theories are viable, experts said.

His new insistence on a “full, transparent, evidence-based” international probe with “access to all relevant data and evidence” from China coincides with the WHO’s World Health Assembly — where next steps in the investigation have been raised — and ups the ante on both allies and American agencies.

Chinese Foreign Ministry spokesperson Zhao Lijiian responded to the rekindled interest in investigating the lab leak theory Thursday, accusing the Biden adminisitration of playing politics and shirking its own responsibility in calling for further probing of Covid’s origins, and saying Biden’s order showed the U.S. “does not care about facts and truth, nor is it interested in serious scientific origin tracing.”

“We know way too little about the who, what, where, when, how and why surrounding COVID-19 origins,” David Asher, a former State Department official who led the department’s investigation into the pandemic’s origins under the Trump administration, said at a private briefing to congressional offices this week obtained by ABC News. “I compare it to a Dali painting where the clocks have melted but time has not stood still.”

A WHO spokesperson said the group is “reviewing the recommendations” from the report, and preparing for the next phase of study.

But the WHO has a limited mandate, with no multilateral regulatory or subpoena power — leaving the global community to strategize.

“If China blocks that then the rest of the world will have no choice but to take an alternative route,” Metzl said.

There’s a delicate balance in the forensic work ahead, experts say.

“The availability of certain data sources might go away, telling antibodies for the virus can wane,” said Dr. John Brownstein, the Harvard Medical School professor who led the satellite research.

“But,” Brownstein, an ABC News contributor, added, “we’re now empowered with a new understanding of the virus — and we can leverage that context as we look back.”