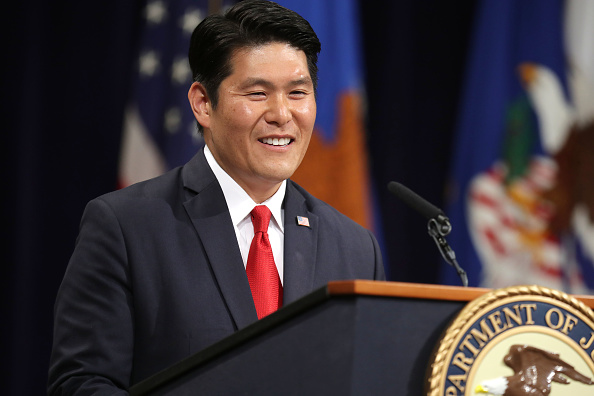 (WASHINGTON) — Experts say the discovery of classified documents at President Joe Biden’s Wilmington, Delaware, home and at an old Washington office of his at the Penn Biden Center has put Attorney General Merrick Garland in the middle of two “unprecedented” special counsel investigations.The parallel probes of both Biden and Donald Trump are an extraordinary circumstance, legal experts and former prosecutors told ABC News, and will inevitably require Garland and the Department of Justice to walk a tightrope to avoid any appearance of politicization while investigating if crimes were broken by the current or former president.

Garland announced on Thursday that he was naming former U.S. Attorney Robert Hur as a special counsel in the investigation of Biden’s handling of classified material that he apparently kept from his time as vice president.

The attorney general previously appointed special counsel Jack Smith to lead the Department of Justice’s probe into the retention of classified documents at Trump’s Mar-a-Lago estate in Florida.

Biden’s attorneys have cast the discovery of the classified documents at his home and office as an inadvertent “mistake.”

Trump denies wrongdoing and has said, without evidence, that he allegedly declassified the records at his home. Trump’s attorneys have also refused when pressed by the Justice Department to back up his declassification argument in court, where making false claims carries the potential for sanctions or other punishment.

Garland stressed Hur’s appointment was reflective of the department’s “commitment to both independence and accountability, in particularly sensitive matters, and to making decisions guided only by the facts and the law.”

While the special counsels will operate with autonomy, it is Garland who will have the final say over whether to charge either Biden or Trump with a crime, such as violation of the Presidential Records Act or statutes that dictate proper handling of classified material. One expert who spoke to ABC News was skeptical of Garland charging one individual and not the other.

“This is really an unprecedented moment, mind-boggling frankly,” she added.

In both cases, it also remains unclear how the materials at issue could affect national security. Lawmakers in Congress expect to be briefed on their contents and have asked for an intelligence assessment of the documents.

Meanwhile, there is technically a third special counsel also at work under Garland: John Durham was appointed by then-Attorney General William Barr in late 2020 to investigate the origins of the FBI’s investigation of the Trump 2016 campaign’s ties to Russia. Durham has not formally closed his investigation and is expected to issue a report that Garland could decide to release publicly.

Trump is already using the revelation about classified documents at Biden’s home and office to claim selective prosecution — that the Democratic Party has “weaponized” federal law enforcement against him.

His allies have decried a “double standard” over the handling of Biden’s case, though Biden aides highlighted his stated willingness to cooperate in returning the classified material from his vice presidency and in explaining why it was kept.

House Republicans, who are now the majority in the chamber, have launched their own investigation into Biden’s handling of classified documents while out of office. Many have seized on the fact that his residence was not similarly raided after federal agents executed a search warrant at Mar-a-Lago.

“I mean, there’s a two-tier system of justice here with respect to how the former president [is] treated versus the current president,” Kentucky Rep. James Comer, the GOP chairman of the House Oversight Committee, told ABC News Live anchor Linsey Davis.

According to court documents and public statements, Biden and Trump’s teams seem to have responded to the government with much different levels of cooperation regarding their classified documents: The National Archives said it negotiated with Trump’s team throughout 2021 to retrieve 15 boxes taken from the White House, finally receiving them in January 2022 and alerting the DOJ to investigate that February, resulting in the discovery of further classified materials.

The Biden matter, by contrast, was first flagged by his attorneys to the National Archives in November, his lawyers have said. They have stressed how they have readily returned the documents they found over multiple searches.

Experts told ABC News that Garland’s selection of Hur to be special counsel was likely an attempt to placate concerns of politicization or bias. Hur was appointed by Trump to serve in one of the largest U.S. attorney’s offices in the nation, when he was the chief federal law enforcement officer in Maryland.

“You want someone like that so there’s no appearance that it’s not in a truly independent prosecutor conducting the investigation,” said Rahmani.

The special counsel investigations are likely to play out in the background of the 2024 race. Trump has already announced his candidacy, and Biden has said it’s his intention to run for a second term but hasn’t made an official decision.

Another layer to the situation is the fact that Biden cannot be charged while he is in office, according to longstanding Department of Justice policy, which views impeachment as the only method to hold a president accountable for their actions while in office.

But Trump, as a private citizen, can be charged — though such a move would be unprecedented, too.

Will it impact the outcome of the cases?

Despite the differences between the two investigations, experts said one question going forward will be whether the Trump case influences the Biden probe and vice versa.

“How much does what’s happening with President Trump impact this?” Dan Abrams, ABC News’ chief legal analyst, said during an appearance on “Good Morning America.”

“For example, are they going to subpoena the Biden team?” Abrams said. “The Biden team will say, ‘Look, we’re giving them everything that we have, you don’t need to subpoena us.’ Do they subpoena them anyway, just to show that they are using the same legal tools that were used in the case of Donald Trump?”

Experts noted the biggest distinction between the Trump and Biden matter so far: the apparent level of cooperation with law enforcement. Biden attorneys have said they immediately notified the National Archives when the documents were found, while court documents show the FBI search of Trump’s home came after a yearlong effort by the National Archives and Justice Department to get documents back from him.

“We’re really looking at apples and orange, but to many people this is gonna look like apples and apples. And I’m not sure even with the most successful messaging from the Department of Justice, they’re going to be able to overcome that,” Krissoff said.

Garland has indicated he is well aware of the public scrutiny around both special counsels. Hur, who is investigating the Biden matter, said in a short statement that he intends “to follow the facts swiftly and thoroughly, without fear or favor.”

Krissoff said she expects the DOJ to bring forward charges against Trump if they have the evidence, telling ABC News: “If they have a strong case, I expect they will move forward regardless.”

“Ultimately, I don’t think the Department of Justice, who tries to stay out of these types of political waters, is going to prosecute one individual but not the other,” Rahmani said.