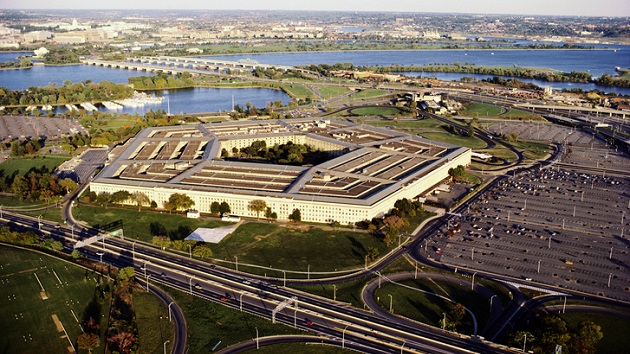 Here are highlights of what a senior U.S. defense official told reporters Friday on Day 33:

The U.S. assesses that Ukrainian forces retook the town of Trostyanets, south of Sumy, in northeast Ukraine, from Russian forces.

“They continue to make progress in that regard,” said the official, who could not confirm reports of other areas having been retaken by the Ukrainians as was reported by Ukraine this weekend.

The official added that Russian forces remain around in a defensive posture, “and the Ukrainians are continuing to try to take back ground,” which they’ve seen in the south and north.

Last Friday, the official said Russian troops north of Kyiv had moved into defensive positions around the city and were putting a priority on operations in the Donbas region of eastern Ukraine.

The official said Monday that Russian troops around Kyiv have stopped making advances towards the city, though they continue using long-range fires. Russian troops remain 15-20 miles north/northwest of the city and about 35 miles east. Russia has now fired more than 1,370 missiles into Ukraine.

“Static situation on the ground there, except for the fact that we continue to see Ukrainians defend the city and try to to push Russians back as well,” said the official.

The southern strategic city of Kherson remains “contested territory,” said the official. On Friday, the official said Kherson, which was seized by Russia early in the fighting, was no longer under full control of Russian forces.

Russia prioritizing the Donbas, but US not sure why

“We’re not exactly sure what’s behind this reprioritization. All I can tell you is what we’re seeing,” said the official.

The U.S. believes it could be to attempt to cut off Ukrainian troops in the east from the rest of the country, to gain leverage for future peace talks or to refocus their strategic goals.

“The Ukrainians are slugging it out in Mariupol and they are keeping the Russians at bay there so far,” said the official.

Russian troops entered the southern port city after pounding with artillery and long-range missiles, apparently destroying entire sections of the city. “We continue to see Mariupol getting slammed by long-range fires,” the official said.

“We are certainly aware of reports that inside Mariupol the Ukrainians are not only fighting very, very hard, but that they are experiencing their own challenges because you’re surrounded,” the official added. “It is under incredible pressure by the Russians, but the Ukrainians continue to defend it.”

US troop extensions in eastern Europe?

A major decision of last week’s NATO leaders summit in Brussels was that the alliance would establish a long-term presence in eastern Europe as a result of Russia’s invasion of Ukraine. This includes an additional 6,000 American ground forces moved into eastern Europe to reassure NATO countries that border Russia ahead of that invasion.

Now, there are questions about if they will remain there longer than what has been described by the Pentagon as a temporary deployment.

The official noted that when Defense Secretary Lloyd Austin ordered additional troops to Europe in recent months, “We made it clear at the time that they will be there for as long as we believe they were necessary to be there, and the secretary continues to believe that they’re necessary.”

The official characterized them as temporary deployments and said Austin is constantly discussing U.S. troop posture with Gen. Tod Wolters, the commander of U.S. European Command and the top commander of NATO forces, and Gen. Mark Milley, the chairman of the Joint Chiefs of Staff.

“Those troops are still there and the secretary assesses that they need to stay there, and so I have no announcements or changes to that posture except for those six Growlers that we talked about this morning and as we as we can talk about, we certainly will,” said the official.

On Monday, the Pentagon announced that six U.S. Navy EA-18 Growler aircraft capable of jamming radars with electronic warfare equipment were being deployed to Germany to reinforce NATO’s eastern flank and to deter Russia.

“They are not being deployed to be used against Russian forces in Ukraine,” Pentagon spokesman John Kirby stressed in making the announcement. “They are being deployed completely in keeping with our efforts to bolster NATO’s deterrence and defense capabilities along that Eastern flank. They are not being sent because of some sort of acute threat that was perceived or some specific incident that happened.”

“This is in order to bolster readiness, enhance NATO’s collective defense posture and further increase air integration capabilities with our allied and partner nations,” Kirby said.