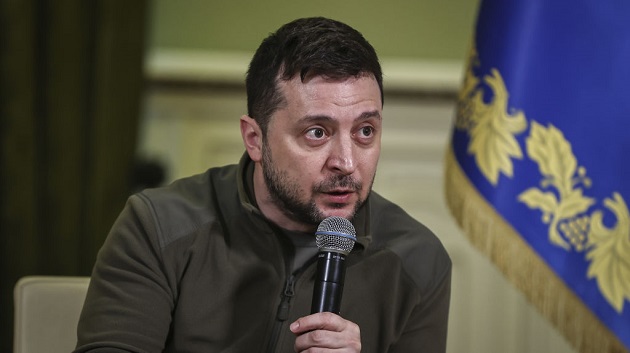 (WASHINGTON) — Ukrainian President Volodymyr Zelenskyy is set to deliver a historic, virtual address to Congress on Wednesday to plead with the U.S. to do more to help stop Russia’s invasion of Ukraine.

Although it’s unclear whether Zelenskyy will pressure President Joe Biden by name to have NATO impose a no-fly zone, Biden will be watching Zelenskyy’s address at 9 a.m., White House press secretary Jen Psaki said, and will also give an address of his own afterward, detailing what the U.S. is doing for “Ukrainian security assistance.”

He gave something of a preemptive response in remarks to reporters on Tuesday while signing a $1.5 trillion government funding bill, which includes $13.6 billion in supplemental aid to Ukraine.

“We’ve been providing anti-armor — taking out and air capabilities — directly, directly to the Ukrainian forces. We’re also facilitating significant shipments of security assistance from our allied partners to Ukraine,” Biden said. “With this new security funding … we’re moving urgently to further augment the support to the brave people of Ukraine as they defend their country.”

While the U.S. has imposed a slate of economic and trade sanctions to isolate Putin, the Biden administration has flatly and repeatedly rejected a no-fly zone, as well as U.S. troops fighting Russia in Ukraine and any help delivering MiG-29 fighter jets that Poland wants to get to the Ukrainians. It’s also unclear whether Congress might try to move to act unilaterally if the White House doesn’t take more action.

Zelenskyy’s address to Congress is expected to be similar to the one he made to Canada’s Parliament on Tuesday, according to a Ukrainian official familiar with the remarks.

Addressing those lawmakers, Zelenskyy, in an emotional appeal for a no-fly zone, said that at least 97 Ukrainian children have been killed in the last 20 days in onslaught ordered by Russian President Vladimir Putin.

“We are not asking for much,” he said. “We’re asking for justice, for real support, which will help us to prevail, to defend, to save lives.”

He called for more sanctions on Russia and for businesses to end their operations there and repeated his pleas for “aerial support.”

“Close the sky, close the airspace,” he continued. “Please understand how important it is for us to close our airspace from Russian missiles and Russian aircraft.”

Zelenskyy received a standing ovation, both before and after his remarks, but his central plea — for NATO to impose a no-fly zone over Ukraine — has met with no success not just with the U.S. but with other NATO nations as well. He seized the chance to get personal with Canadian Prime Minister Justin Trudeau on Tuesday, calling on Canadians to imagine they were under attack — something he may do as well speaking to Congress, with Americans watching a live stream of his remarks.

“How much more cruise missiles have to fall on our cities until you make this happen?” he asked. “We’re asking for more of your leadership and, please, take more, greater part in these efforts, Justin, and all of our friends of Ukraine.”

Pleas for a no-fly zone

Given Zelenskyy’s pleas, Psaki was pressed Tuesday on how the administration planned to deal with the likely request for measures like closing the airspace above Ukraine.

“I would say that without knowing what he’s going to say tomorrow, we certainly are familiar with what the asks have been. We have provided our own assessment of what does make sense and doesn’t make sense,” Psaki said, noting the additional funding to Ukraine Biden was signing.

Another reporter followed up, “Is Zelenskyy wasting his time tomorrow asking for these things?”

“Because of the passion and the courage and the bravery of President Zelenskyy, there has been support for expediting the delivery of a historic amount of military and security assistance and weapons that have helped him and his military fight back against the Russians,” Psaki said. “And I would say that, yes, we recognize there are a range of bipartisan calls, but what we have the responsibility to do here is to assess what the impact is on the United States and our own national security.”

Psaki added that a no-fly zone “essentially means us shooting down Russian planes, and them essentially shooting back at us.”

As the shelling of civilian residences continues in Ukraine, Biden said last week Russia would pay a “severe price” if it used chemical weapons — but the White House has refused to detail what those consequences would look like. Former President Barack Obama drew a red line on chemical weapons in Syria, but despite pressure from Congress, the administration has hesitated to declare the same.

While Zelenskyy has been vocal in pushing the West to do more, members of both parties in Congress have also pressed Biden to do more to step up aid and led the charge for trade sanctions the White House ultimately took on last week.

Senate Minority Leader Mitch McConnell accused the administration on Tuesday of “dragging its heels” in getting aid to Ukraine.

Asked how lawmakers might navigate having to deny Zelenskyy some of the security measures he may request of them, McConnell indicated he would agree to what Zelenskyy is asking, aside from imposing a no-fly zone.

“My guess is that everything he is going to request is something we ought to be doing, and so my individual response to that would be yes,” McConnell said. “The administration needs to get the message they need to help the Ukrainians in every conceivable way we need to do it, and we need to do it right now — not only us but our NATO allies — who seem to be way more anxious than this administration to help the Ukrainians.”

Senate Majority Leader Chuck Schumer called the invitation to Zelenskyy to speak to Congress “one of the highest honors” bestowed by the body on a foreign head of state.

“We have all been inspired by the courage of President Zelenskyy and that of the Ukrainian people. President Zelenskyy can rest assured that he will always have friends in Congress ready to listen to stand in his corner, and we’re honored to have him speak to us later this week,” he said on the Senate floor Monday.

As he continues his appeals to the West, the Ukrainian president last week also became the first foreign leader to virtually address the U.K.’s House of Commons and echoed Winston Churchill’s famous June 1940 speech after Allied forces pulled off the “miracle of Dunkirk.”

“We will not give up, and we will not lose. We will fight till the end – at sea, in the air, we will continue fighting for our land whatever the cost. We will fight in the forests, in the fields, on the shores, in the streets,” he said, met, again, with a standing ovation.