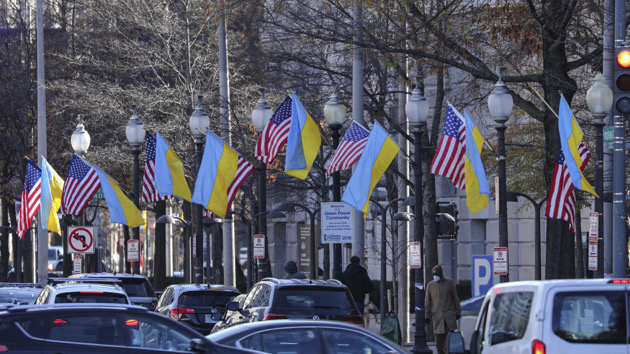 (WASHINGTON) — Ukraine’s President Volodymyr Zelenskyy is making a dramatic visit to Washington Wednesday — his first trip outside Ukraine since the Russian invasion began in February.

He’s set to visit President Joe Biden at the White House and address Congress as lawmakers vote on $45 billion more in emergency aid, and Biden is expected to announce the U.S. will send Ukraine a Patriot anti-missile battery to defend against devastating Russian attacks.

In a virtual address to U.S. lawmakers back in March, Zelenskyy emotionally pleaded for more aggressive measures to help fight the war. Invoking key American tragedies, including Pearl Harbor and the Sept. 11 attacks, Zelenskyy told members at the time, “Just remember it … Our country experiences the same every day right now.”

President Zelenskyy has arrived at Blair House, which now has a Ukrainian flag flying overhead. Blair House, located across the street from the White House, is the residence where foreign dignitaries often stay when visiting Washington.

Senate Minority Leader Mitch McConnell, R-Ky., made the case for more military aid for Ukraine on Wednesday as some in his party oppose sending more money to the nation.

“The most basic reasons for continuing to help Ukraine degrade and defeat the Russian invaders are cold, hard, practical, American interests,” he continued. “Helping equip our friends in eastern Europe defeat this world is also a direct investment in reducing Putin’s future capabilities to menace America, threaten our allies and contest our core interests.”

But some in the GOP are questioning the amount of aid being sent to Ukraine, arguing the government should be investing that money domestically. “American taxpayers are literally paying to prop up many countries all over the world in foreign aid, but America is virtually crumbling before our eyes,” Rep. Marjorie Taylor Greene argued in a series of tweets on Wednesday.

Other Republicans argue the need for more oversight of the funds being approved for Ukraine, stating they don’t want to write a “blank check” to Ukraine.

From the frontlines of the war in Ukraine to the political frontlines of Washington on Capitol Hill and the White House, Zelenskyy continues to take risks to defend Ukraine and show masterful skill at using language and symbolism to marshal international support.

“Remember Pearl Harbor. The morning of December 7, 1941, when your sky was black from the planes attacking you. Remember. Remember September 11. A terrible day in 2001 when people tried to turn your cities into battlefields. When innocent people were attacked from the air. No one expected it. You couldn’t stop it,” he said in his virtual speech to Congress in March.

“Our country experiences the same every day,” he said.

Zelenskyy made an unannounced visit to the front-line city of Bakhmut on Monday, where Ukrainian and Russian forces have fought a months-long battle. The comedian-turned-politician who was elected to lead Ukraine in 2019, was named Time’s person of the year earlier this month “for proving that courage can be as contagious as fear.”

A U.S. official confirms to ABC News that Ukrainian President Volodymyr Zelenskyy has landed in the U.S.

Zelenskyy’s trip to Capitol Hill will be similar to State of the Union preparations because of the high-level nature of the address. Security officials at the most senior levels of government are “very” concerned about the prospect of something happening tonight, domestically or abroad, one source told ABC News.

According to an email sent to staff at the Capitol and obtained by ABC News, security measures will be “significant.” The email says only staff and members will be allowed in the House wing past a certain time.

Another official said, “We are very cognizant that Russia has assets in this country and might try to do something. We know what is at stake.”

The source said the U.S. is aware that early on in the conflict the Russians apparently plotted to kill Zelenskyy. The official expressed concern that news of Zelensky’s visit broke so early about him coming to the United States. It would have been much better, he said, if our adversaries had less time, not more time, to think about doing something and to move assets and operatives around.

Zelenskyy’s trip to Washington is being treated as a mini-state visit — a visit with extraordinary security implications, according to multiple sources. Hundreds of law enforcement and intelligence officials have been activated for this visit with the U.S. Secret Service tasked as the lead agency.

“From the moment he lands and walks down those stairs of his plane, he will have a Secret Service security detail,” one official tells ABC News. “He will have that detail until he gets on the plane to leave.”

Secret Service is also consulting with the Capitol Police, CIA, FBI and other intelligence agencies about the security environment. One source told ABC News every Capitol Police officer is on standby.

“Where Winston Churchill stood generations ago, so, too, President Zelenskyy stands not just as a president but also as an ambassador to freedom itself,” Schumer said.

Churchill, prime minister of the United Kingdom during World War II, addressed U.S. lawmakers in a speech the day after Christmas in 1941 — just weeks after the Pearl Harbor attack.

“Sure I am, that this day, now, we are the masters of our fate,” Churchill told Congress. “That the task which has been set us is not above our strength. That its pangs and toils are not beyond our endurance. As long as we have faith in our cause, and an unconquerable willpower, salvation will not be denied us.”

Schumer said he will “happily join” Congress in welcoming Zelenskyy, and urged Republicans to attend the joint meeting.

“It is a high honor to welcome a foreign head of state to Congress, but it is nearly unheard of to hear from a leader who is fighting for his life fighting for his country’s survival and fighting to preserve the very idea of democracy,” Schumer said.