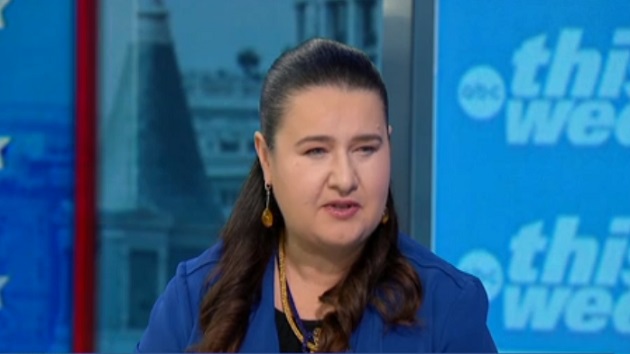 (WASHINGTON) — With prominent Republicans in Congress calling for more scrutiny of aid to Ukraine as it defends itself from Russia’s invasion, the country’s ambassador to the United States said Sunday that “we actually welcome the transparency and accountability.”

“We’re working with Congress on a very strong bipartisan basis. … And there is a number of systems already in place. The NATO system on the security systems, but also the full reporting on the budget support,” Oksana Markarova told ABC “This Week” co-anchor Martha Raddatz. “So, we look forward to continuing doing that. And, actually, we really count on Congress continued support, especially for 2023.”

GOP Rep. Michael McCaul said in a “This Week” appearance last month that while most members on both sides of the aisle support those efforts, Republicans “have a voice now” — as the incoming House majority — and will provide more oversight of the spending.

The Biden administration maintains that efforts are already underway to make sure funds and munitions are being properly administered and Congress instructed watchdog agencies at the State Department and Pentagon to track the aid as well.

“During the last two months … there is a massive attack on civilian infrastructure: 50% of the energy is destroyed of the energy grid. We have to stop it. And the only way to do it is with increased number of air defense everywhere in Ukraine,” Markarova said on “This Week.”

Raddatz asked about the Russian embassy warning of “unpredictable consequences” if the U.S. agrees to send the enhanced defensive arms.

“This is very cynical of them. I mean, they have attacked a peaceful country,” Markarova responded, claiming that Russia has been committing “all atrocities” and “war crimes.”

Markarova said the focus should be on winning the war and holding Russian President Vladimir Putin and other Russian officials accountable. Raddatz asked if — despite Ukraine’s successes in recent months with its counter-offensive — she was worried about a new offensive from Russia in the winter or new year, and Markarova said she was.

“We just have to be proactive and together, with all of our friends and partners, we are thankful for all the support that we are getting to continue to stay the course, liberate the territories and defend Ukraine,” she said.

She also said Ukraine was on alert for the possible involvement of the Belarusian military to the north, supporting Russia. Last week, Belarus’ president, Alexander Lukashenko, announced an unscheduled check of the army’s readiness.

“The people in Belarus do not want to be part of this war. … And, hopefully, you know, they will be able to stay away, at least from the direct involvement in this war, and stop what they’re doing already,” Markarova said.

She repeated what President Zelenskyy has also vowed: to oust Russian forces from Crimea, which Putin annexed from Ukraine in 2014, and reclaim the peninsula that the Russian leader prizes.

“That seems like a clear red line for Vladimir Putin,” Raddatz pressed. “How do you take back Crimea?”

Markarova again attacked Russia’s illegal actions, but Raddatz pushed her to respond to the difficulty of a Ukrainian military operation there.

“Everything is very difficult. And, ultimately, we are paying a higher price for liberating our land and our people,” Markarova said. “But there is no other option because we know what happens under Russian occupation. They are killing and torturing and destroying Ukrainians.”