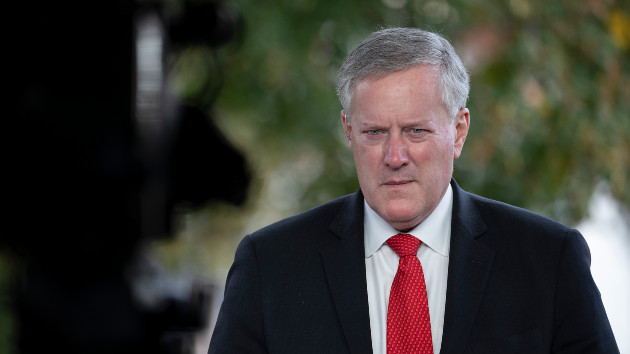 (WASHINGTON) — A judge has ordered former President Donald Trump’s last chief of staff, Mark Meadows, to travel to Georgia to appear before the grand jury investigating efforts to overturn the 2020 election there, according to a spokesperson for the Fulton County district attorney’s office.

The ruling from the South Carolina judge comes after Meadows’ lawyer argued in a filing on Monday that Meadows cannot be compelled to testify because, although the special grand jury is investigating alleged criminal conduct, it does not have the ability to return a criminal indictment and can only make recommendations concerning criminal prosecution.

Meadows’ lawyer also argued that as a “special grand jury,” the panel lacks the authority to compel testimony from witnesses who live out of state. Meadows currently resides in South Carolina.

Meadows was on the January 2021 phone call that then-President Trump had with Georgia Secretary of State Brad Raffensperger in which Trump asked Raffensperger to “find” him enough votes to win the state.

Trump, who has denounced the Fulton County probe, has repeatedly defended his phone call to Raffensperger, calling it “perfect.”

Meadows is likely to appeal the ruling ordering him to appear, according to his lawyer.