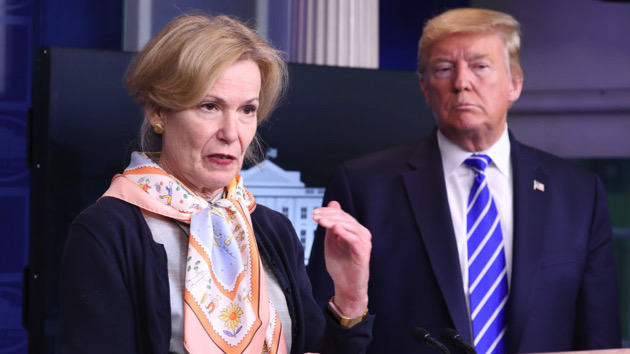 (NEW YORK) — Dr. Deborah Birx, a former White House COVID response coordinator under then-President Donald Trump, told Congress on Thursday that Trump’s focus on the 2020 election got in the way of a strong COVID response in the winter of 2021.

Birx, who has written a book on her time working with the White House in the early days of the pandemic, spoke to the House Subcommittee on the Coronavirus Crisis largely about what she said were the errors the Trump administration made and times she disagreed with its approach.

She told the committee that was told to delete recommendations of masks and social distancing in reports that went out to states’ governors and that those reports — once put out weekly — would only be provided if the states asked.

The former COVID coordinator and longtime public health official also said she put together a plan in September and October for how to go into the surge that she “knew was coming to the United States throughout that fall and winter of 2020 into 2021.”
MORE: ABC News Exclusive: Dr. Birx speaks to Trump disinfectant moment, says colleagues had resignation pact

She said she was given reason to believe that the plan would be used by the White House, but instead it never went anywhere.

“That strategy was never fully executed in all of its robust and comprehensive approach because the teams were never brought back together,” Birx testified.

“I believe it is because they were distracted by the post-election issues,” she said.

That fall and winter was the deadliest time of the pandemic in the US. More people died than at any other point in the pandemic to date.

Birx also said that she believes if Trump had followed her recommendations and data, lives would’ve been saved.

The misinformation circulating in the White House, Birx said, made it hard to act on plans.

“When you no longer agree on what is actually happening in the country and what needs to be done, and there’s not consensus on that, then you lose the ability to execute in the maximum efficient and effective way,” Birx said.

Going forward, Birx said the country still is not in a good place.

She argued that the Biden administration needs to be watching for new variants that could cause surges and launch quickly on proactively testing vulnerable people and prescribing Paxlovid, which can be lifesaving if given in the first five days of illness.

She also said the country shouldn’t overlook the toll that hospitalizations have taken on people, even as the country surpasses the tragic milestone of one million deaths.

“Hospitalizations in people over 70 is not benign. It’s not benign,” she said.

“I know everybody focuses on the deaths but I want to make it clear, many more Americans have suffered really significantly from being hospitalized and another whole group still has long COVID,” Birx said.

“And so you know, this isn’t trivial — this virus is not trivial, and should not just be immediately discarded as we’re doing fine. We are not doing fine yet.”