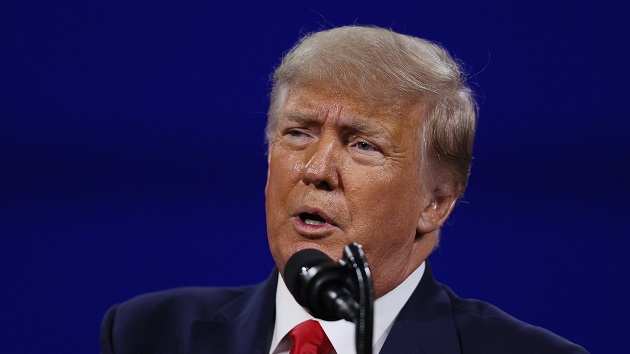 (WASHINGTON) — A new study suggests that former President Donald Trump’s inflammatory rhetoric around the coronavirus, which is believed to have originated in China, helped spark anti-Asian Twitter content and “likely perpetuated racist attitudes.”

The Asian American community has experienced a striking rise in incidents of hate since the onset of COVID-19, according to officials and advocates, and critics say the former president’s repeated use of “China Virus” and other terms helped fuel an environment of hatred.

“Anti-Asian sentiment depicted in the tweets containing the term ‘Chinese Virus’ likely perpetuated racist attitudes and parallels the anti-Asian hate crimes that have occurred since,” said Dr. Yulin Hswen, an assistant professor of epidemiology at UC, San Francisco and the study’s lead author.

The results, published in the American Journal of Public Health, come in the wake of a string of attacks on Asian communities in the U.S., including a series of shootings in Georgia that left six women of Asian descent dead.

Dr. John Brownstein, an ABC News Medical Unit contributor and author of the study, said that such online conversations can spark violent reactions.

Dr. Daniel Rogers, an expert on misinformation at New York University, said that hateful content on social media can lead to more of the same being served up to users via platforms’ algorithms.

“As platform algorithms pick up on engagement around this toxic content, they recommend increasingly more extreme content to users until their feeds are dominated by nothing but the most extreme stuff, goading those users with a propensity toward violence to potentially committing hate crimes,” Rogers said.

Researchers also found that the timing of the former president’s tweet was significant. The first time he used “ChineseVirus” was March 16, 2020, and the following week saw an increase in anti-Asian hashtags and a rise in hate crimes.

International health officials purposely avoided attaching geography to the virus, as had been done in the past, to avoid casting blame, but Trump insisted on tying China to COVID-19 at every turn.

Experts and policy makers warned against using inflammatory and racist tweets since they can serve as a rallying cry for hate crimes.

“Don’t attach locations or ethnicity to the disease, this is not a ‘Wuhan Virus,’ ‘Chinese Virus’ or ‘Asian Virus,” the World Health Organization wrote in a February 2020 bulletin.

In a wide-ranging press briefing on Wednesday, Biden administration press secretary Jen Psaki said that damaging rhetoric from the prior administration led to “inaccurate, unfair” perceptions that threatened Asian Americans.

One year ago, at the start of the pandemic, Trump condemned xenophobic attacks against Asian Americans, but he continued to use incendiary rhetoric and deny doing so was racist.

On the night several Asian women were shot dead in Atlanta, he referred to COVID-19 as the “China Virus” on Fox News.

The Trump Organization did not immediately respond to a request for comment from ABC News.

Hswen said it’s more important now than ever for our leaders to use neutral language because inflammatory words can influence people’s behavior toward particular groups.

The study results, Hswen said, “confirm that nationality, race, or ethnicity should not be attached to disease nomenclature, as these names can carry pejorative connotations that can stigmatize these communities.”