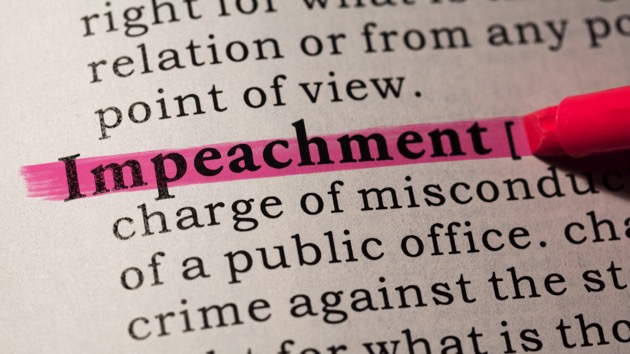 (WASHINGTON) — Former President Donald Trump has submitted his formal answer to the article of impeachment through his attorneys, arguing that the trial is unconstitutional as he is out of office, and denying that he violated the oath of office.

The crux of Trump’s legal argument is that the trial is unconstitutional — a “legal nullity,” his attorneys write — because he is no longer a sitting president.

But attorneys Bruce Castor Jr. and David Schoen, who were retained just two days ago after the previous legal team quit in part over disagreements in strategy, made it clear they are leaving the door open to argue claims of election fraud, and appear ready to defend the president’s words at the Jan. 6 “Save America” rally that preceded the deadly attack on the Capitol, which Trump has been charged with inciting.

In their brief filed Tuesday afternoon, Trump’s attorneys deny that Trump was “factually in error” when he claimed on Jan. 6 that he had won the election by a landslide.

“It is admitted that President Trump addressed a crowd at the Capitol ellipse on January 6, 2021 as is his right under the First Amendment to the Constitution and expressed his opinion that the election results were suspect, as is contained in the full recording of the speech,” Trump’s lawyers write.

“To the extent Averment 5 alleges his opinion is factually in error, the 45th President denies this allegation,” the brief said, responding to the portion of the article of impeachment that states: “Shortly before the Joint Session commenced, President Trump, addressed a crowd at the Capitol ellipse in Washington DC. There, he reiterated false claims that ‘we won this election, and we won it by a landslide."”

The article of impeachment also cited Trump’s call with Georgia Republican secretary of state Brad Raffensberger in which Trump urged him to “find” enough votes for him to win the state.

“The people of Georgia are angry. The people of the country are angry, and there’s nothing wrong with saying that, you know, that you’ve recalculated,” Trump said on the hour-long call. “All I want to do is this: I just want to find 11,780 votes, which is one more than we have … Fellas, I need 11,000 votes, give me a break.”

Trump’s lawyers say the “recording accurately reflects the content of the conversation,” but that the comments aren’t inappropriate in any way.

House Democrats filed their own brief earlier Tuesday, arguing that Trump bears “unmistakable” responsibility for inciting the Jan. 6 riot on the Capitol and calling it a “betrayal of historic proportions” that demands judgment from the Senate.