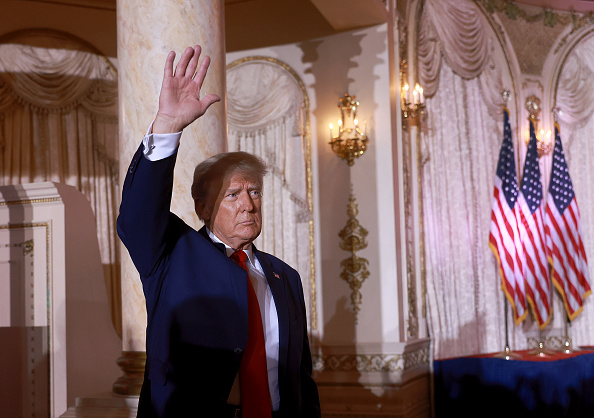 (WASHINGTON) — The House Ways and Means Committee voted along party lines on Tuesday to release information from former President Donald Trump’s tax returns covering 2015-2020. That move capped a tumultuous legal battle over the documents and drew the spotlight back to the years-long controversy over Trump’s decision not to disclose financial information after launching his political career.

Trump broke decades of tradition when he first ran for president in 2016 and — after initially suggesting otherwise — refused to release his tax returns, claiming he was under audit by the IRS.

Democrats have long criticized that move and, since they retook the House in 2018, sought to obtain the records themselves, which they ultimately accomplished last month.

Trump isn’t the first president for whom his taxes were controversial: In 1973, Richard Nixon started the custom of presidents releasing their tax information — with Nixon’s release intended to assuage the public after scrutiny over some deductions he claimed.

Later, after the IRS began a policy of automatically auditing presidents and vice presidents’ taxes, then-Vice President George H. W. Bush paid nearly $200,000 in back taxes on previously undisclosed income from the sale of a home.

In Trump’s case, information released by the House panel on Tuesday — while they say they are redacting information from the wider records to come within days — showed that in some years between 2015 and 2020 he paid little to no taxes and, multiple times, reported tens of millions in losses.

In 2018 and 2019, when he reported positive income rather than losses, he paid a combined $1.1 million in taxes, according to the committee.

Republicans on the House committee warned Democrats were setting a dangerous precedent of using private financial records as partisan weapons, but the committee’s chairman, Richard Neal, D-Mass., said the decision “rises above politics.”

The committee highlighted how they found the IRS had not followed its automatic audit policy with Trump until 2019, after he was already in office.

Along with questions about auditing and privacy, political strategists said the tax release raises the possibility of damaging Trump’s standing with voters, who have said they want him to disclose more about his finances.

“With the exception of Donald Trump, every major party presidential nominee over the past 40 years has released their tax returns, so yes, I think Americans are entitled to know what’s in them,” said Democratic pollster Matt Hogan. “It’s not that the average American wants to know what’s in a candidate’s tax returns, it’s that if the candidate won’t release them, it sends a signal to voters that the candidate is hiding something.”

Polls have indicated that the public wants to know more about Trump’s taxes. An ABC News survey from 2017 — near the height of the debate over the documents — showed that 74% of adults thought his returns should be released.

At the same time, strategists like Hogan noted, Trump broke with other presidents and candidates in many ways. Democratic rival Hillary Clinton hammered the tax issue on the trail and he defeated her in 2016.

During one 2016 debate, Clinton said that for several years Trump paid nothing in taxes — a barb he turned into a badge of honor.

“Why won’t he release his tax returns? Maybe he doesn’t want the American people, all of you watching tonight, to know that he’s paid nothing in federal taxes,” she said in one debate. “Because the only years that anybody has ever seen were a couple of years when he had to turn them over to state authorities when he was trying to get a casino license and they showed he didn’t pay any federal income tax.”

“That makes me smart,” Trump responded.

After taking office, Trump continued to maintain he was under audit — telling ABC News’ Jonathan Karl in 2018 that that was one reason he didn’t want to give Democrats his returns.

“If I were finished with the audit, I would have an open mind to it … but I don’t want to do it during an audit,” he said then.

But since becoming the leader of the Republican Party, Trump has continually declined to release details about his finances like his predecessors, who cited the need for transparency.

Nonetheless, some Trump tax information leaked to The New York Times in 2020 and, in November, an accountant described his financial losses about a decade ago while testifying in the trial of his company, the Trump Organization.

“This isn’t the first time Trump’s tax returns have been put out in the public sphere. It didn’t matter then, and it won’t matter now,” said one Trump ally, granted anonymity to speak candidly.

Sarah Longwell, a GOP pollster who has been critical of the former president, took another view.

“How much it matters is entirely dependent on what’s in them,” Longwell said. “Assuming it’s more of the same — not paying taxes and inflating valuations — then I don’t think it’ll make much public opinion difference. But if there’s something explosive, it can add to the accumulating perception of Republican voters that Trump has too much baggage to be electable.”

Some prominent conservatives in Washington are condemning the upcoming release while focusing on how it could affect the public — not Trump.

“It will be a regrettable stain on this committee,” Texas Rep. Kevin Brady, the ranking Republican on the House Ways and Means Committee, told reporters earlier this week.

“Let me be clear, our concern is not whether the president should have made his tax returns public as is traditional, nor about the accuracy of his tax returns,” Brady said then. “Our concern is that if taken, this committee action will set a terrible precedent that unleashes a dangerous new political weapon that reaches far beyond the former president and overturns decades of privacy protections for average Americans.”