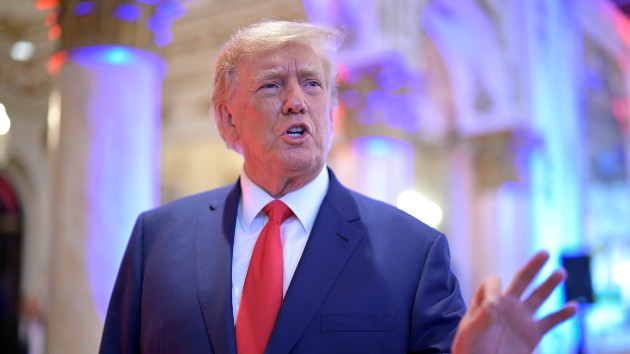 Phelan M. Ebenhack for The Washington Post via Getty Images

(WASHINGTON) — Donald Trump on Thursday escalated his criticism of Florida Gov. Ron DeSantis, suggesting he views DeSantis as a potential challenger in the 2024 Republican presidential primary.

In a lengthy statement — echoed on his social media website, Truth Social — Trump jabbed at DeSantis as an “average” governor who benefited from “great Public Relations.”

In his statement, which also included characteristic complaints about his media coverage and repeated unfounded claims of election fraud, Trump touted himself as being a key endorser during the 2018 Florida gubernatorial primary, when DeSantis ran against Adam Putnam for the GOP nomination.

“He was politically dead,” Trump argued of DeSantis at the time, insisting that his support had been key to the primary win.

“And now, Ron DeSanctimonious is playing games! The Fake News asks him if he’s going to run if President Trump runs [in 2024], and he says, ‘I’m only focused on the Governor’s race, I’m not looking into the future.’ Well, in terms of loyalty and class, that’s really not the right answer,” Trump said.

Sources with direct knowledge of the matter have told ABC News that Trump is leaning toward announcing a third run for the White House, possibly as early as the week of Nov. 14. The former president has also been teasing a 2024 run at rallies across the country for several months.

He said last week during an Iowa rally, “In order to make our country successful, and safe and glorious, I will very, very, very probably do it again,” adding, “Get ready, that’s all I’m telling you. Very soon. Get ready.”

Trump said earlier this week there will be a “very big” announcement on Tuesday at Mar-a-Lago in Palm Beach, Florida.

Trump went on to say Thursday that he had faced similar rivals in the 2016 GOP presidential primary and “I easily knocked them out, one by one.”

Aides for DeSantis did not respond to requests for comment on Trump’s criticism.

Sources close to the former president immediately categorized this statement as a “miscalculation” on Trump’s behalf. Two former senior White House officials who still advise Trump told ABC News Thursday night that this is the weakest they’ve seen him politically.

“His overreaction against DeSantis is making it even worse,” one top aide said.

“Unhinged. This is not going to work for him,” another top aide added.

In recent days, the former president has alternated between swipes at the Florida governor, such as the “DeSanctimonious” label, which he first used last weekend, and then telling a rally on Sunday to reelect DeSantis, the closest comments he made to an endorsement.

He also publicly said he voted for DeSantis, who went on to beat Democrat Charlie Crist by nearly 20% — a notable margin in a state famous for its close races. By comparison, many other Republican candidates suffered this midterm cycle despite predictions of a possible “red wave” against the in-power Democrats.

Two senior DeSantis campaign officials earlier told ABC News — before Trump’s statement on Thursday — that the campaign made a conscious decision in the final days not to respond to Trump’s taunts. Those included the nickname and Trump telling Fox News on election eve that he “would tell you things about [DeSantis] that won’t be very flattering — I know more about him than anybody other than, perhaps, his wife.”

DeSantis’ aides also said he and his team were aware of his success compared to others in the party who were closely tied to Trump.

When asked what DeSantis was thinking after his election win this week, a top adviser told ABC News that he was focusing not on politics but on Tropical Storm Nicole.

Like Trump, DeSantis campaigned for multiple other Republican candidates this midterm season, such as J.D. Vance in Ohio (who won) and Mark Ronchetti in New Mexico (who lost). When DeSantis stumped for Colorado Republican Senate nominee Joe O’Dea, who had broken with Trump, the latter called it a “big mistake.”

DeSantis has repeatedly played down speculation that he will run for president in 2024 — even as that became an attack line from Crist during the campaign.

“He’s in no hurry. He doesn’t have to be in a hurry … What he’s doing is continuing to elevate his stature and his name ID, his conservative credentials to a larger audience,” Stephan Lawson, DeSantis’ director of communications for his 2018 gubernatorial campaign, previously told ABC News. “I think he’s doing it in a way that’s like, ‘I’m gonna go court and talk to this base of our party in a way that could potentially have broader appeal based on my record of results in Florida."”

“Put another way — ‘I’m gonna get all the good without the bad of taking on Trump directly,"” Lawson said at the time.